Posted on August 19, 2019 by thehistorytourist

“How cute is he?” I asked Patricia. It was Sunday morning and we’d ducked out of the rain and into St. Louis Cathedral (officially the Cathedral-Basilica of St. Louis), where we sat dripping all over a back pew. Had I spotted the newest Hollywood hearthrob? No, the cutie I’d spotted was the Archbishop of New Orleans. We didn’t arrive until the end of mass — we were headed to the Cabildo Museum and ducked into the church to get out of the rain — so I didn’t actually know he was the archbishop until his procession walked by us, with him in bishop fuschia (technically called “amaranth red” by the Church) and carrying his Little Bow Peep crook.  But there he was, as tiny and cute as a clerical Funko bobblehead. 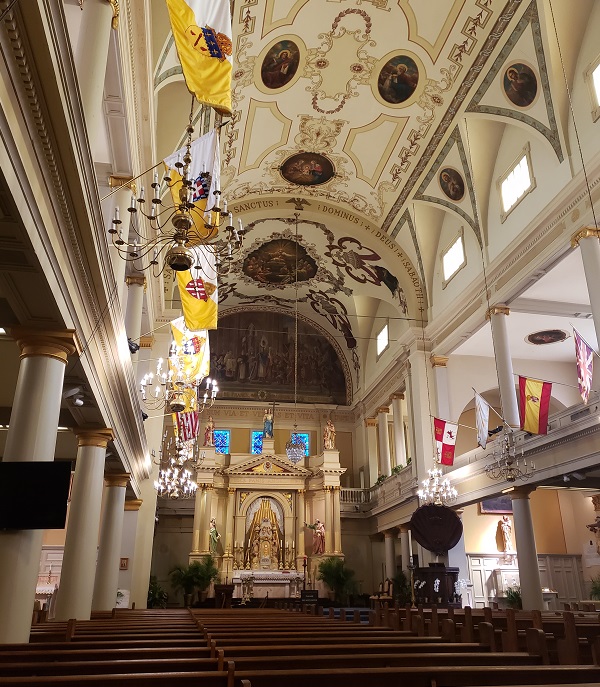 St. Louis Cathedral stands between the Cabildo and Presbytere, facing Jackson Square and the Missippissi River. The original St. Louis, completed in 1727, was destroyed by fire in 1788. The Baron Pontalba, father of Michaela, financed the building of the second St. Louis, completed in 1793. By the mid 19th century, the second building was collapsing and in 1850, the cathedral was almost completely rebuilt. So while there are often claims that it’s the oldest church in the Catholic archdiocese of New Orleans, St. Mary’s Church at the Ursuline Convent, dedicated in 1845, is an older building.

With the new building came a new clock, with bell, and a new central tower to house the clock and bell.  The clock came from France with a French inscription that translates into: Brave people of Louisiana, this clock, whose name is Victory, was cast in memory of the glorious 8th of January, 1815. Above the inscription is an American eagle.

The tower was designed by architect Benjamin LaTrobe, whose son had fought in the Battle of New Orleans and who had designed the US Capitol Building and other DC buildings. He died not long after in the New Orleans yellow fever epidemic and is buried in the Protestant section of St. Louis Cemetery #1 (which is the cemetery for the cathedral). 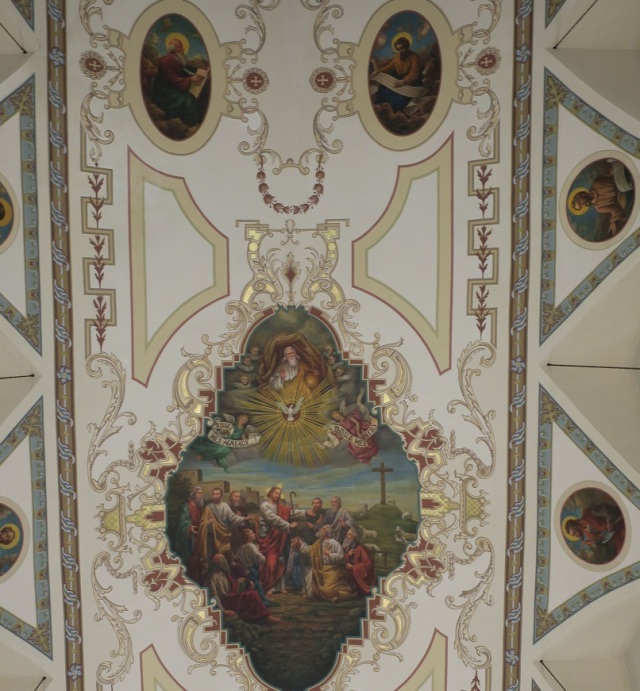 Below is a photo of a statue of King Louis IX of France, for whom the cathedral is named, near the entrance to the church.

He was a Catholic zealot and a not-very-nice-guy who was canonized by Pope Boniface VIII in 1297. He expanded the Inquisition and in 1242, ordered the burning of all Talmuds in France. He made cutting off lips and tongues the penalty for blasphemy. No dog-friendly road to sainthood here — just torture and mutilation.

Gallery | This entry was posted in Louisiana. Bookmark the permalink.