Posted on May 7, 2019 by thehistorytourist

The last time I was in Corolla, on the Outer Banks of North Carolina, I was there to run the Currituck Wild Goose Chase 5k Donut Dash.  The donut dash, which started and ended at the Currituck Beach Lighthouse, was a race with donut stations sprinkled throughout the course. For each donut a runner ate, time was taken off the runner’s final result. Eat enough donuts and, technically, a runner could finished before they started. 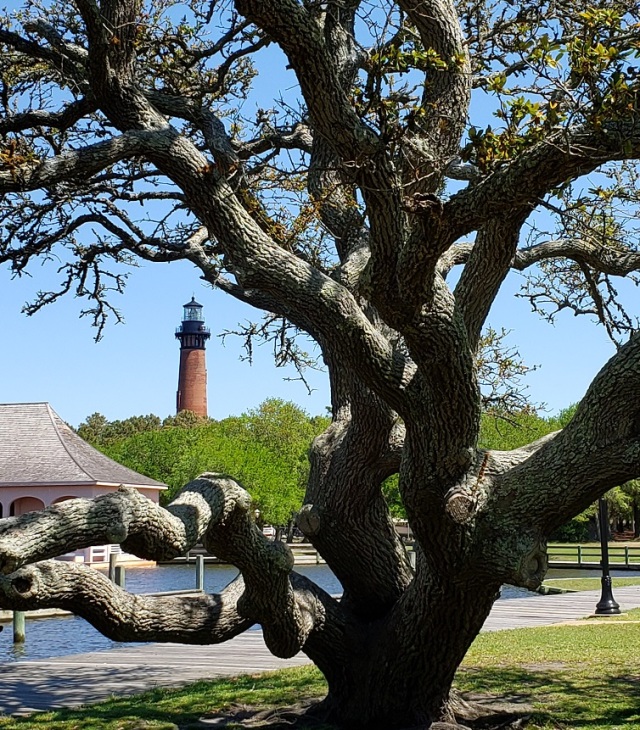 Feeling nostalgic, Mr. History Tourist and I made a return visit to the Outer Banks last week, for the first time in five years.  When our children were small and we had two large dogs, Mr. History Tourist and I spent our summer holidays on the Outer Banks of North Carolina. We’d rent a large house on the water in Nags Head, and wander the wildlife refuges, kayak the sound, swim in the ocean and sit on the deck, just watching the birds fly by. We stopped going after about 15 summers, when our kids grew up and our dogs passed away, and we were free to choose destinations that weren’t as child and dog friendly.

Like Charleston, I’ve written a lot about the Outer Banks over the years. But I managed to eek out a few new experiences for the blog, starting with a stay in Corolla. Corolla is on the northern end of the Outer Banks, about 10 miles from the Virginia border. We’d always included a day trip to Corolla during our Outer Banks visits, but we never over-nighted there.

This time, we spent two nights in a (let’s all say it together) Hampton Inn on the beach. It was a lovely property and our room, on the second floor on the far left of the photo below, had a lovely ocean view.

My favorite spot in Corolla is Currituck Heritage Park, a 40 acre property that’s home to the Currituck Beach Lighthouse, the Historic Whalehead Club house museum (in the photo below, taken from the top of the lighthouse), and the Outer Banks Center for Wildlife Education.

I’d toured Whalehead before, and written about it, so I didn’t go in again. Plus, they don’t allow photos taken inside so it’s useless from a blogging standpoint. It’s been restored to its stunning 1920s art nouveau self, though, so worth the visit if you ever have the chance. 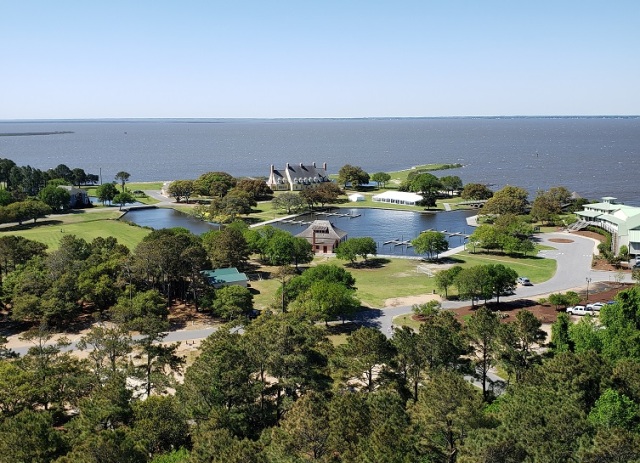 The Currituck Beach Lighthouse is half way between two older lighthouses — Cape Henry Lighthouse near Virginia Beach, Virginia to the north, and the Bodie Island Lighthouse to the south. Fifty-six ships would be lost in the dark expanse between Cape Henry and Bodie in the mid 19th century, before the powers-that-be got the hint and the Currituck lighthouse was commissioned in 1875.

The Donut Dash taught me that doughnuts and running don’t mix. Too queasy to drive back to our Nags Head rental house after my 4 doughnut run, we decided to climb the lighthouse. It was 220 steps to the top.

We climbed it again this time.  It’s a lot easier without a stomach full of fried, sugared dough.

Adjacent to the park is  Historic Corolla Village, a cluster of cute little houses that have been turned into retail space. I’d highly recommend the Corolla Village Market, which is a cooperative featuring about 60 local artists. I did most of my souvenir shopping there.

Gallery | This entry was posted in North Carolina. Bookmark the permalink.