Posted on April 11, 2019 by thehistorytourist 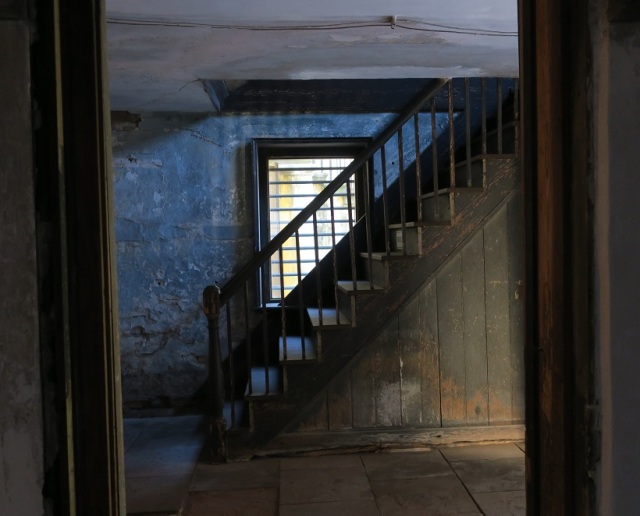 So the perfect compromise for me is the “preservation, not restoration” movement, where structures are loved and cared-for, but otherwise untouched.

We started at the Aiken House, which was a couple of block from the hotel. “Do you want to use your own phone, or do you want to use one of our recorders?” the Aiken receptionist asked us. For the audio tour, that is. We used theirs, because figuring out how to get the tour on our phones was more work than a couple of old ladies were willing to go through. 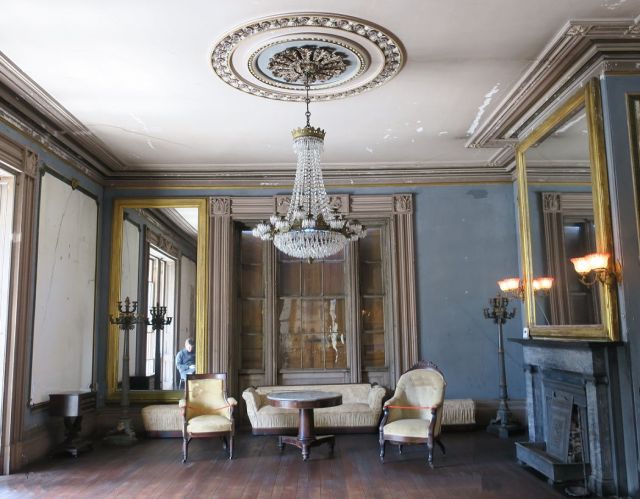 The house was built in 1820 by merchant John Robinson but is named after its third owner, William Aiken Jr., a wealthy planter who became a congressman and a governor of South Carolina. He inherited the house from his father, expanded it and, after his marriage, turned it into his family home. 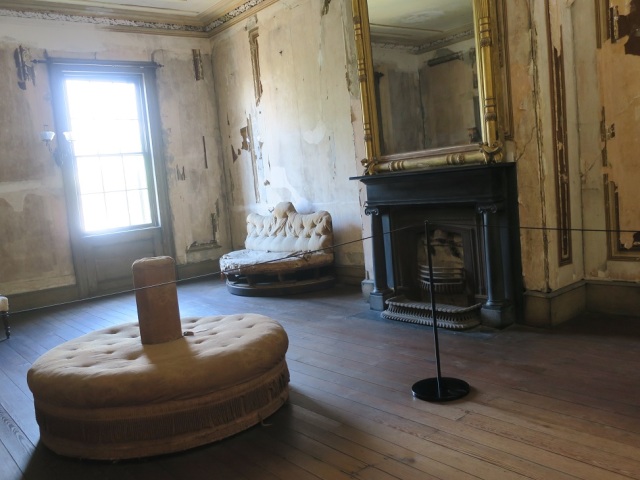 The Rhett of Aiken-Rhett came in when his only child, Henrietta, married Andrew Burnet Rhett.  Aiken was a Unionist who did not support southern secession (though he financially supported the Confederacy when it did happen), and he wasn’t happy when his only child decided to marry into an ardent secessionist family. When she married in 1862, Henrietta wore a dress made by her bridesmaid, Julia Rutledge, out of curtain material Julia had acquired before the war. Shades of Margaret Mitchell.

Starting with Henrietta, rooms in the house that weren’t needed were simply closed. You can tell by the two photos above. It looks like the blue drawing room was used to the bitter end, while the yellow room was abandoned early on.

I don’t know why, but Charlestonians call a veranda a “piazza.” The Grand Tour and a Room with a View and all that, I suppose.

Behind the main house are the dependencies, with slave quarters on the second floor.  Records show that William Aiken owned 878 slaves in 1850.  In the photo below, the stables are on the left and the kitchen and laundry are in the buildings on the right.

The audio tour includes the stories of the enslaved people, by name, including the Richardsons, the Greggs and the Cruchfields.  Dorcus Richardson worked for an orphanage for African-American children after the war and her signature on bank accounts shows that she was literate.  The Gregg children were also literate, perhaps taught by their aunt Dorcus.

It’s often assumed that the walls of slave quarters were always white washed. But paint analysis at Aiken shows that these rooms were brightly colored. 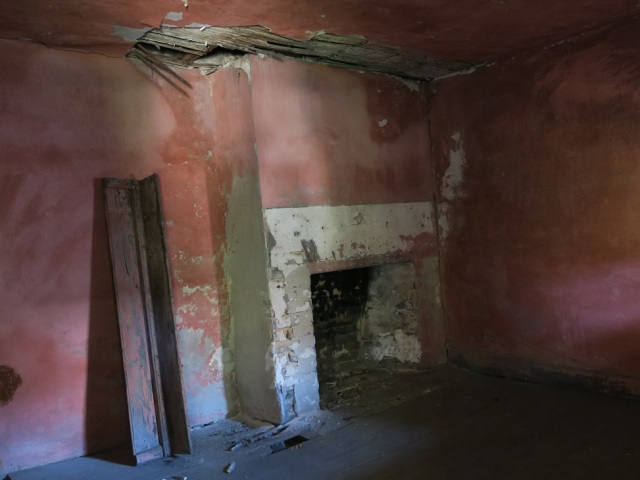 Jacob Gilliard, an enslaved butler and coachman for the Aikens, was still living there in 1896. In fact, servants continued to live in the rooms on the second floor of the dependencies until at least 1961. There is wiring that shows that there was once electricity to the rooms but no evidence of indoor plumbing.

Henrietta’s sons, I’On and Andrew, resisted modernization.  So much of the house remained as it was from the beginning. The last occupant was I’On’s widow, Frances, who donated the house to the Charleston Museum, which opened it to the public in 1975. Ownership switched to the Historic Charleston Foundation in 1995.

You can download, for free, the tour of the Aiken-Rhett House, including the audio, from their website.

Gallery | This entry was posted in South Carolina. Bookmark the permalink.