Basilica of St. Francis of Assisi

Posted on September 3, 2018 by thehistorytourist

The last thing I expected, at the Basilica of Saint Francis of Assisi in Assisi, were the soldiers with submachine guns roaming the basilica grounds.  Yes, they’d been at other major tourist attractions.  We’d had to go through security scanners at the Vatican museums and at the Accademia and Uffizi in Florence.  But this was Assisi, home of gentle Saint Francis, who talked to the animals and preached kindness to all creatures great and small.  There had been bombs set off in churches around town (the PLO took credit) in the 1980s, though, so they weren’t taking any chances.  All the tourists — nuns, kids, elderly tourists — got the full scan and pat-down routine going into the basilica. 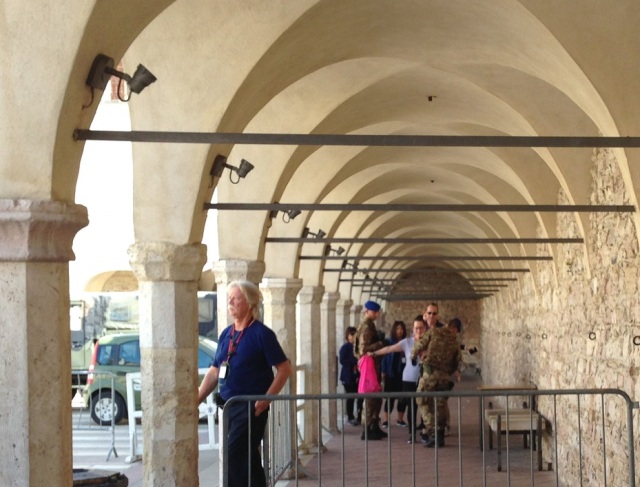 Saint Francis of Assisi is (next to the Virgin Mary) the Catholic Church’s most popular saint. I don’t know who takes these polls, but it could have something to do with the number of Hollywood films made about him, or the number of garden statues he sells  (full disclosure: I have a stone wall-plaque of him in my back yard), or the number of pets who sport Francis of Assisi medals on their collars (more disclosure: my dogs wore them – they were gifts from Patricia).  He’s the patron saint of animals and the environment and, along with Catherine of Sienna, of Italy.

He’s also the business of Assisi, where he was born. Assisi is a mid-sized (population-wise, though it has a small-village feel) town in Umbria, near the top of Mount Subasio, in the Apennine Mountains. Its location, mid-Italy, made Umbria an early and important commerce center.

Assisi is a picture-perfect Italian village and I’ll get into that part of our visit in the next post.  But there’s no denying that Saint Francis is its raison d’etre  and our visit started where everyone else’s does: at the Basilica of St. Francis of Assisi.

The basilica, which houses an upper church, a lower church and a crypt where Saint Francis is buried, was started in 1228.  It contains what’s thought to be the most important Renaissance frescoes outside of the Sistine Chapel. Unfortunately, some of them were damaged (and four people in the Basilica killed) in September 1997 when two section of the ceiling collapsed during an earthquake, 5.7 on the Richter Scale, that hit Assisi. It took two years for the basilica to be repaired and reopen. If you’re interested in medieval and Renaissance art and architecture, you could take days just to explore the basilica, its museum and other offerings. 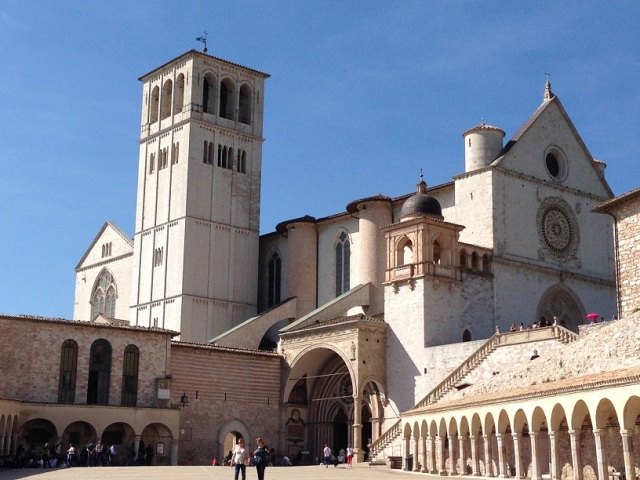 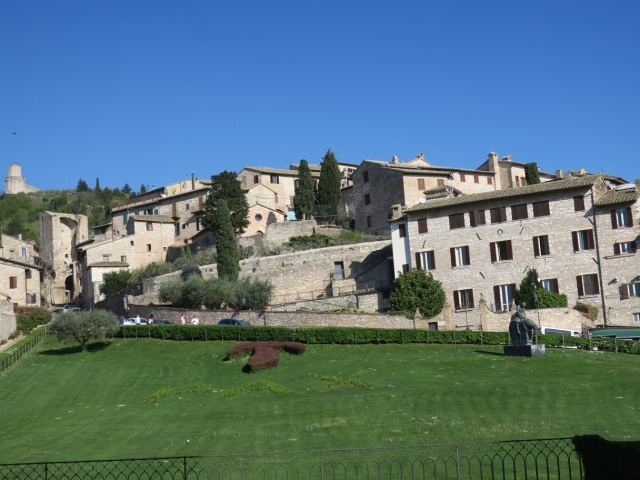 Part of Saint Francis’ legend is that animals would flock to him in a Disney Snow White kind of way. In the fresco below, he’s blessing birds who have come to hear him speak. The guy behind him doesn’t look that happy about the whole thing, though, does he.  The scene is one of 28 frescoes chronicling the life of Saint Francis, painted (between 1297 and 1300) on the walls of the upper church. There is no photography allowed in the basilica, so this photo comes from Wiki. For years, Giotto was given credit for the painting but lately, that’s been in dispute. 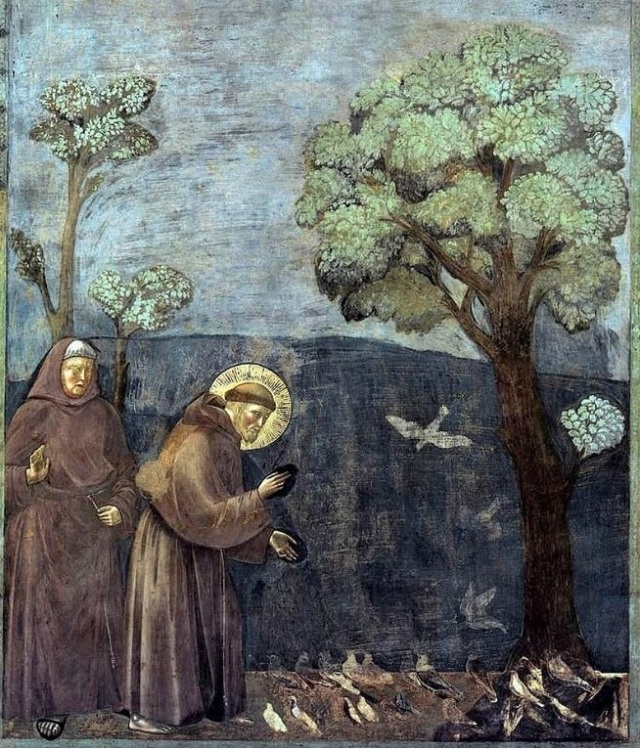 Francis was buried at the Church of Saint George, on the other side of town, when he died in 1226.  His body — his entire body, it seems — was moved to the basilica after it was completed. So no body-less head or feet floating out there. The only relics of Saint Francis on offer are articles of clothing, and we were off to see them next, at the Basilica of Saint Clare.

Gallery | This entry was posted in Italy Umbria. Bookmark the permalink.

2 Responses to Basilica of St. Francis of Assisi