Posted on June 29, 2018 by thehistorytourist

When Queen Victoria was given, by the Duke of Tuscany, a replica of Michelangelo’s marble masterpiece David, she was so shocked by his genitals (David’s, not the Duke’s) that she required they be covered by a plaster fig leaf before she’d allow him to be displayed at the Victoria and Albert Museum. The fig leaf was detachable, though, so that David could be shown in all his glory (although he’s quite famously small in that region so glory may not be the right description) when the queen wasn’t around.

Michelangelo and his David were recurring themes during our visit to Florence. It was dusk when we got there and the bus took us directly to the Piazzale Michelangelo, built in 1869 on a hill south of city center. Even with several hundred of our closest friends also there to share the panoramic sunset view, it was amazing.  Only the construction crane and cars in the distance told us that we hadn’t been transported into the Renaissance.  We could have been, instead, on the set of Room with a View.

Florence is the capital of Tuscany and was the center of medieval Europe. From 1865 to 1871 it was the capital of Italy, until it lost out to Rome.  That move, it seems, had to do with the symbolism of Rome being the seat of the Roman empire. The powers that be of the Kingdom of Italy had always wanted it to be the capital and once Rome was finally captured from the French and made part of the the Kingdom of Italy, it happened. It doesn’t matter, because Florence was the birthplace of the Renaissance and continues to be an international artistic and cultural center.

In the center of the Piazza Michelangelo is a bronze cast of Michelangelo’s David, the first of three versions we’d see in Florence. We were scheduled to see the original the next day and sure enough, bright and early, we convened in the hotel lobby for a short walk to the Galleria dell’Accademia.

It wasn’t the most direct route, but we were taken to the Accademia by way of Santa Maria del Fiore.  It’s Florence’s cathedral (for all you nonCatholics: HQ for the Archbishop of Florence, who oversees all the Catholic churches in a prescribed area) and took 140 years to build (1296-1436). The cathedral, its baptistery and its bell tower, along with the rest of historic center city Florence, are part of — yes, you guessed it — a UNESCO World Heritage site. 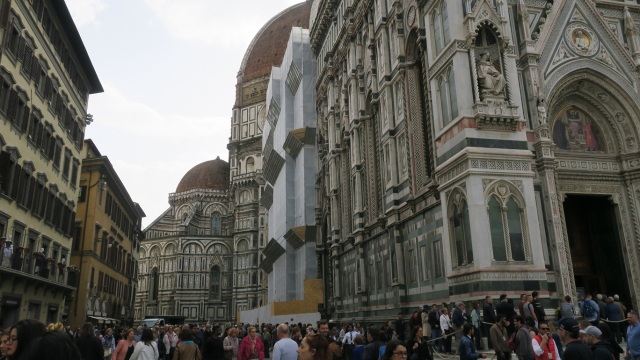 See that line of people against the wall of the cathedral? They’re waiting to get in. Entry requires a (free) ticket which you can get, in advance, online.  If you go, the cathedral’s English website asks that you “Dress appropriately to a place of cult.” Make of that what you will.

There was a ridiculously long line for the Accademia as well (so buy your tickets online, in advance).  The Accademia, says its website, “is Florence’s most visited museum after the Uffizi Gallery.”  The words in bold amuse me, coming as they do just before an abnegation. I guess just saying “Florence’s second most visited museum” doesn’t cut it. 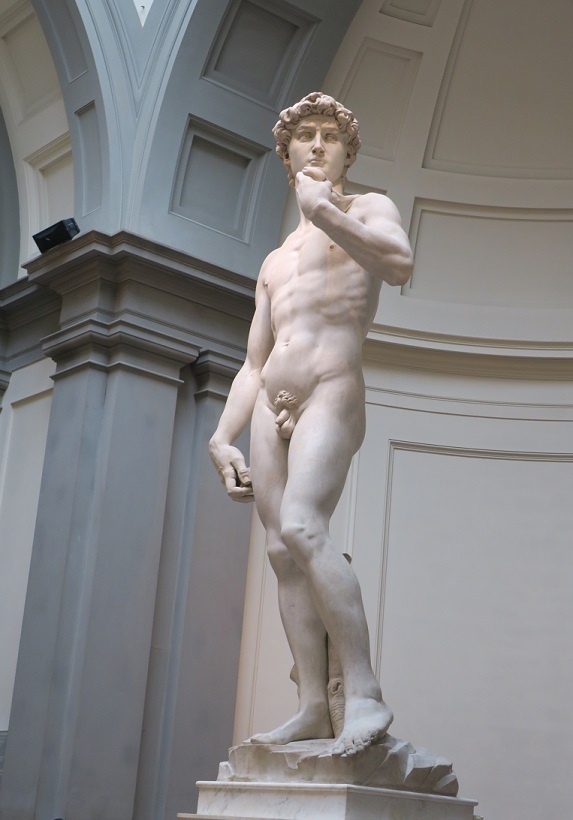 In any case, Michelangelo’s David is the most popular art work in Florence, and the Accademia — not the Uffizi — has him.  David is the David of David and Goliath and Michelangelo started the statue when he was 26.  David was originally commissioned to go somewhere near the top of Santa Maria della Fiore, which is why (says one explanation of many) his body parts — most notably his huge head and right hand — are disproportionate. They were carved to be seen as symmetrical from the ground. But when it was delivered, the powers that be decided that the statue was too perfect to be hidden high on a church roof, so he was put in the main square of Florence instead. In 1873, to protect him from weather damage, he was moved to the Accademia.

My favorite piece at the Galleria wasn’t David, however, but the circa 1555 Palestrina Pieta, so called because it was originally in the Barbarini Palace in Palestrina, about 35 kilometers east of Rome. It was originally attributed to Michelangelo but it’s now thought that it was done by someone else — Bernini seems to be the front runner. I like it much better than Michelangelo’s Pieta at the Vatican, because it’s not pretty pretty but raw, as such a scene would be. 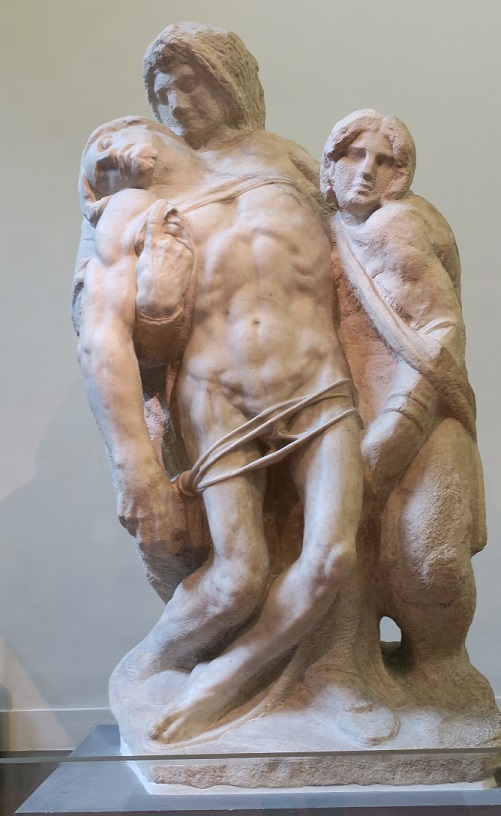 We were released from the group after the Galleria and Patricia and I tried to find a restaurant and a gelato place that had been recommended to us by some folks back home. Armed with two maps and an iPhone GPS, we found neither. There were streets that the maps said should be there, that weren’t. There were streets with names that were almost what we were looking for, but weren’t exactly.  Round and round we went until we just couldn’t.  Florence: 1. History Tourists: 0.

2 Responses to Florence I: Mostly David