Lucca I: San Michele in Foro 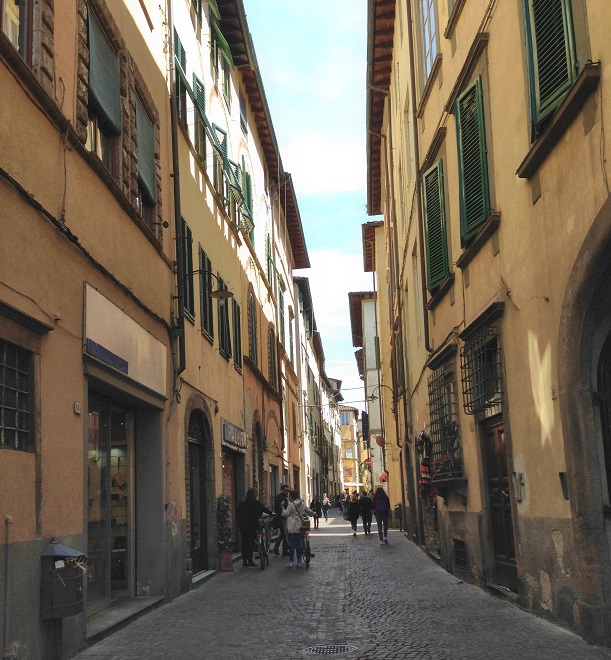 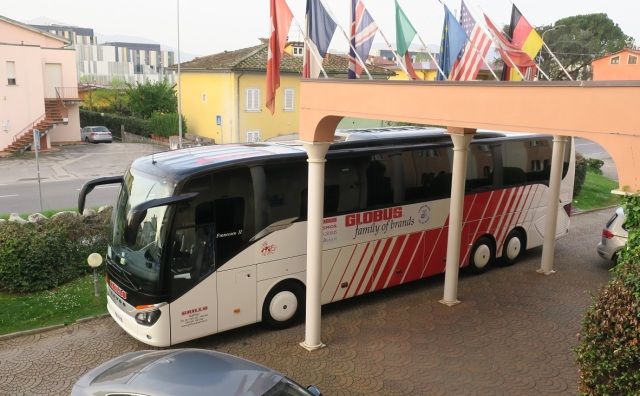 So in Lucca, as in most of the towns we visited, the bus wasn’t allowed in. The oldest part of Lucca is completely encased in a wall, completed in 1650, and the bus had to wait in a large bus lot just outside the wall.

This is a good time to mention that Italy, like the rest of Europe, is for walkers. Vehicles, even non-buses, are restricted in many Italian towns (almost all, for the ones on our tour). The tour brochure warns “be prepared for walking (up to two hours) involving stairs, cobblestones and unpaved, uneven surfaces.”

The “two hours” is misleading. Technically, we may have been given the opportunity to grab a seat somewhere after every two hours of walking. But realistically, we had several days when we were on the go for more than two hours at a time.  And much of the time, the walking was a steep uphill because the hill towns of Tuscany and Umbria are … well … hilly.  And Renaissance buildings don’t have elevators.

If you couldn’t or didn’t want to do the walking or group touring (although there were some cases where you just had to walk, like getting to the hotel in Venice), you could just go do your own thing.  You didn’t have to stay with the group. One of our fellow groupies  couldn’t stand or walk for more than a few minutes. She usually got off the bus and into a taxi, which took her to a picturesque piazza, where she spent the afternoon having wine. 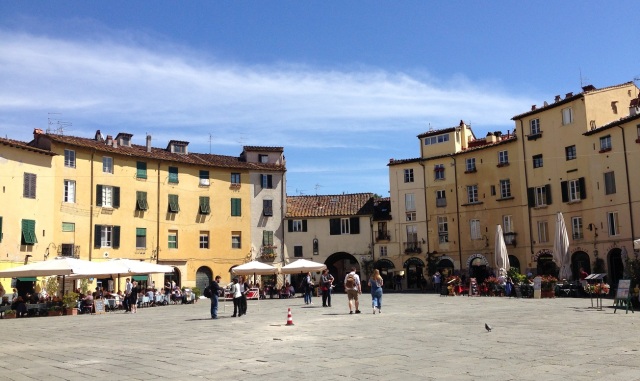 From the Lucca bus lot, Silvana the guide walked us through Porta San Pietro, one of the three Renaissance originals of the six gates into center city Lucca.  We strolled about a kilometer from the gate to the main public square, and there Silvana left us. We had a couple of hours to find our own way back to the bus.

According to the website of the DC chapter of the Lucchesi Association (yes, it is a thing), Lucca was founded by the Etruscans and became a Roman colony in 180 CE. It was an important business (silk merchants) and political center through the Middle Ages and Renaissance, and still important enough in 1805 that Napoleon Bonaparte conquered it  and made his sister Princess of Lucca. Today, it seems that tourism is its primary business.

The square is actually an oval, built over a second century Roman amphitheater.  The buildings have restaurants on the bottom and private residences on top. 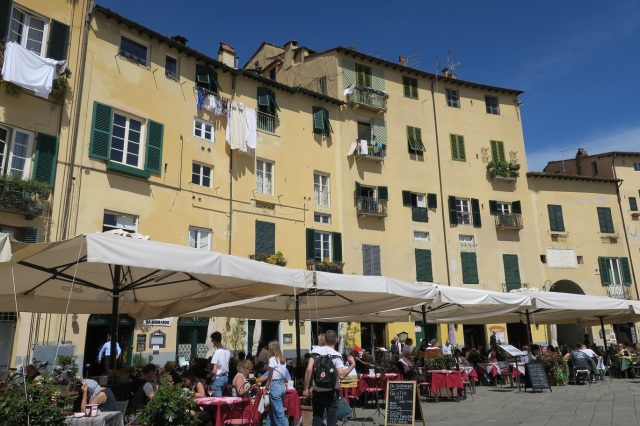 Patricia and I went back to a church we had passed on our way to the oval square. The church was called San Michele in Foro — “in foro” because it was built on the ruins of a Roman forum. I was beginning to see a pattern. 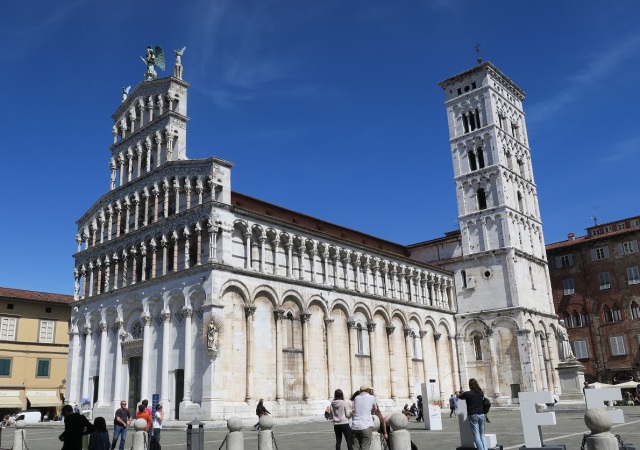 There’s documentation of a church on the site in 795. The current building is mostly from the 12th century. It’s made of marble and is known for the carvings of animals and famous people, on its facade. Garibaldi (1807 to 1882), father of Italian unification, is there: the guy above the pink column, third from the end.  They say that the newer heads replaced “damaged” ones in the 19th century, but it could simply be that new heroes replaced less hallowed occupants. 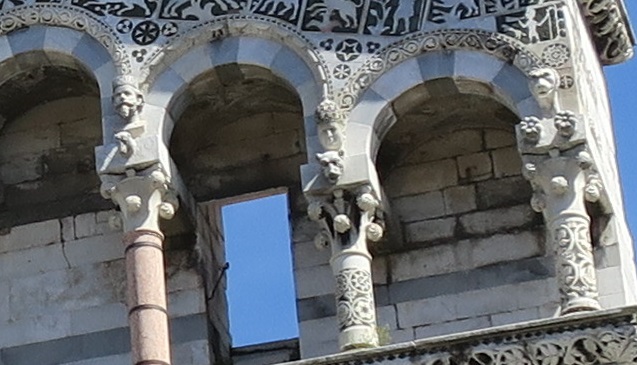 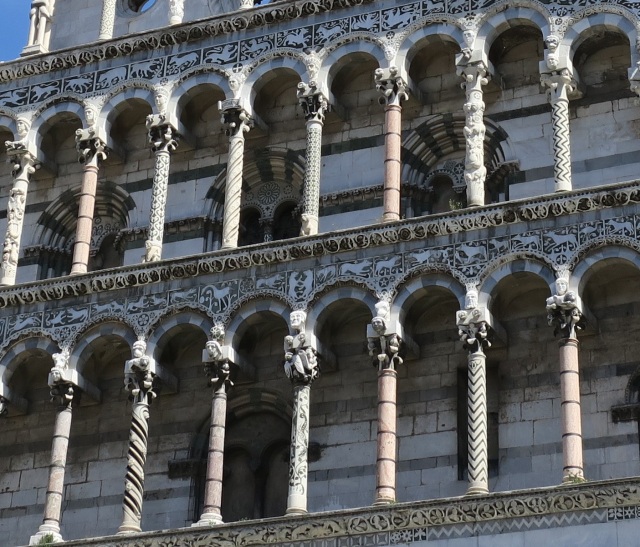 Joy! Photos allowed inside. They seem to have used up all of their ornamentation budget on the exterior — the interior is unexpectedly austere (but beautiful, in my opinion, because it is austere).  The cross above the main altar is wood and 12th century. 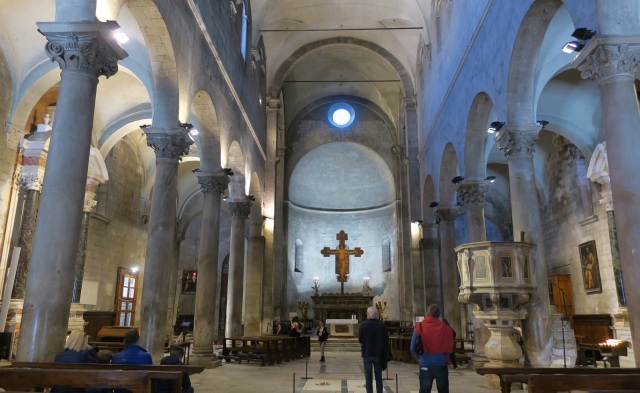 From the church, we went looking for the Museo Nazionale di Palazzo Mansi. It’s a museum of 19th and 20th century art, but I wanted to see it less for the art and more for the Baroque palace that it’s housed in. 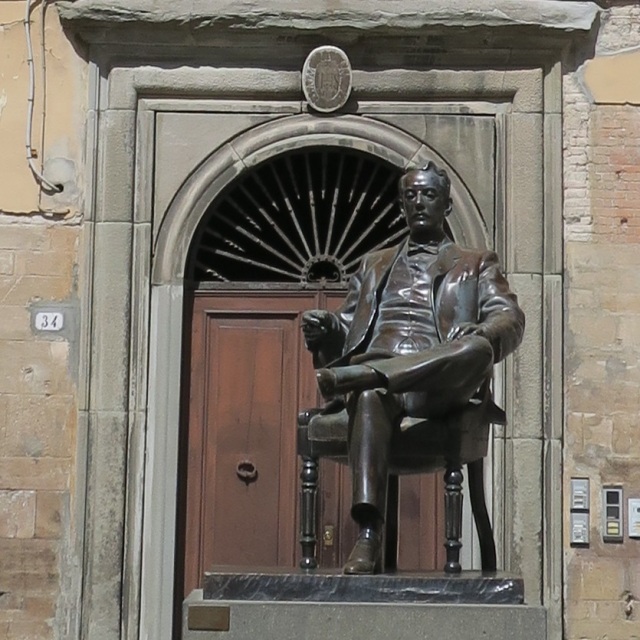 Before we got to the museum, we passed a statue of seated Giaccamo Puccini, Lucca’s most famous native son. I’m not an opera fan, but even I know that he was the composer of La Boheme and Madame Butterfly. 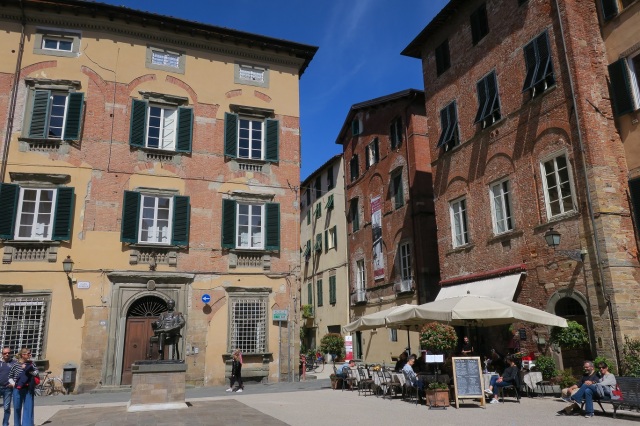 He was born in the house with the banner on it, next to the restaurant. It’s now a Puccini museum. We didn’t have time for a visit, though. We were still on a hunt for the Palazzo Manzi.

Gallery | This entry was posted in Italy Tuscany. Bookmark the permalink.

4 Responses to Lucca I: San Michele in Foro