Just behind the Pantheon is the 14th century Basilica of Santa Maria sopra Minerva.  My patron saint, Catherine of Sienna, is buried there, so I wanted to take a quick run in to say hello. At least, most-of St. Catherine is buried at Santa Maria. Her head and a thumb are at the Basilica Cateriniana di San Domenico in Siena. And one foot, I don’t know which one, is in Venice.

In the Catholic Church, it’s common practice (though no longer required) that an individual be given a saint’s name at their baptism or confirmation. My baptismal name is Catherine, after St. Catherine of Siena (below is a 1961 marble statue of Catherine with all her parts, in the garden of the Castel Sant’Angelo, near the Vatican), a 14th century mystic, diplomat and theologian. She was born in Siena but died in Rome, which is how most of her remained in Rome. 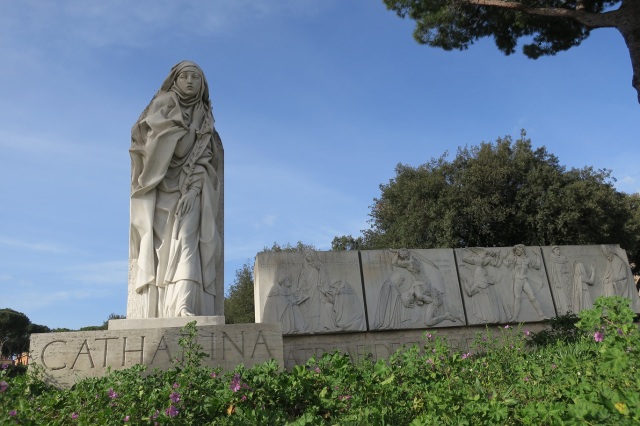 Three temples — dedicated to Minerva, Isis and Serapis — were once located on the site and the basilica is called Santa Maria sopra Minerva (St. Mary above Minerva) because they thought they’d built it on top of a temple to Minerva.  More recently, they’ve found that they probably built on Isis. 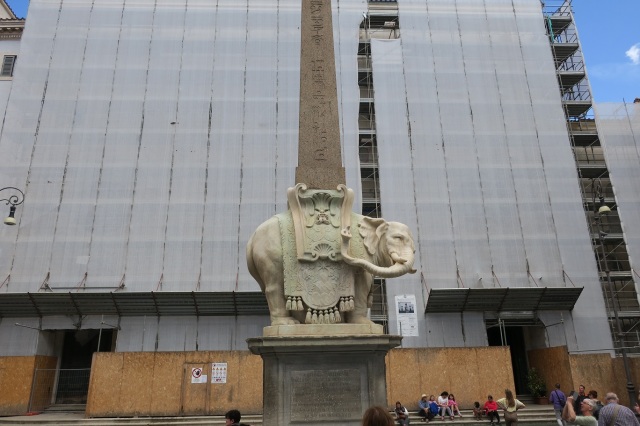 The basilica itself was in hiding, so we went around the block a couple of times before we realized it’d been right in front of us all along. Its facade was covered in plywood and scaffolding because they’re doing restoration work.

The body of St. Catherine lies in marble in front of the main altar. No photos allowed inside. 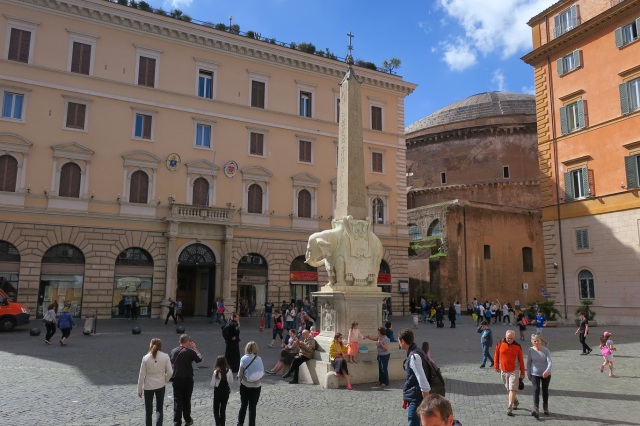 In front of the church is the Piazza della Minerva and in the middle of the piazza was the cute guy above. He’s part of a 1667 sculpture called the Elephant and the Obelisk, designed by Bernini. The elephant part was probably done by a Bernini assistant and the Egyptian obelisk (which may have stood in front of the temple of Isis, at what’s now the site of Santa Maria sopra Minerva) was found in the garden of the Dominican monastery on the right of the photo. The elephant represents a strong mind and the obelisk represents wisdom. So the statue represents “proof that to uphold sound wisdom is the part of the sturdy mind,” as it says in Latin on its base.  Of course. Isn’t that obvious?

Fun fact: the elephant’s derriere points toward the Dominican monastery because Bernini was in a feud with one of the Dominicans, Domenico Paglia.  Father Paglia was an architect whose design for the monument had been rejected by Pope Alexander VII, so he made it his mission to be an itch to the guy who won the commission: Bernini. Bernini got the last word by facing the elephant’s less desirable profile toward Paglia’s office. 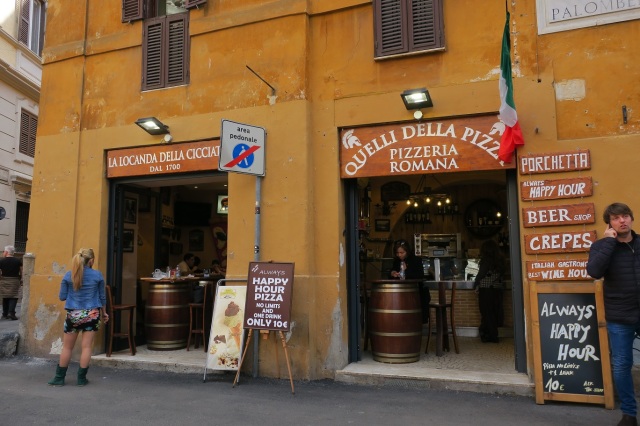 On the way from the Piazza della Minerva to our next destination, the Piazza Navona, we found a pizza place to stop and eat. Quelli della Pizza was a tiny shop where you order pre-made pizza and pay at the counter. I had a slice of basil and tomato pizza that I’d recommend highly. Those barrels are tiny tables, if you want to sit there and eat. Yes, I let Patricia sit. 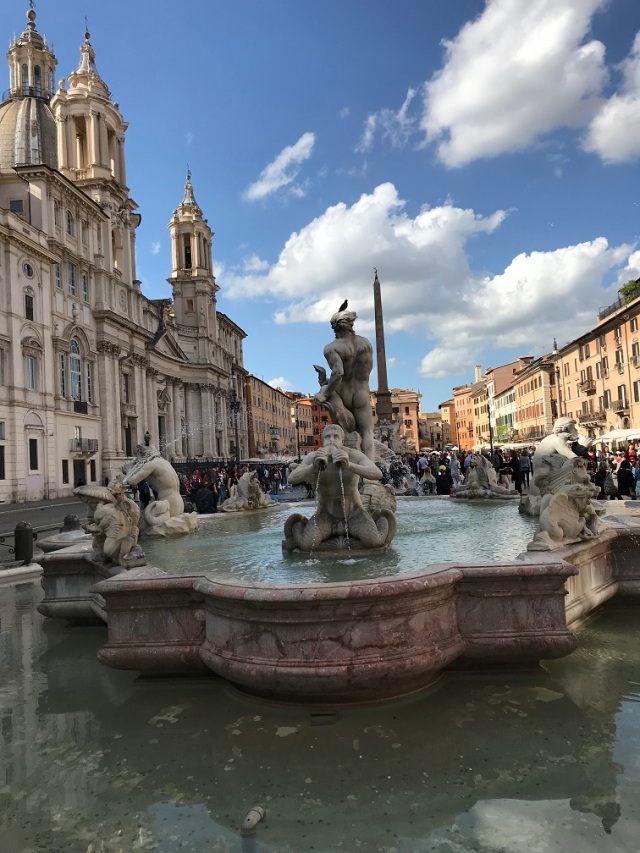 I also let her sit, for a few minutes, at the Piazza Navona (credit for photo above to Patricia). It’s a large public square (actually, kind of an oval) built at the site of a 1st century stadium.  There’s a Bernini fountain in the middle.

Do you remember that this is the Gelato Tour of Italy (history and art incidental)? We had our daily scoop of gelato at the Gelateria dei Gracchi, just steps away from the Piazza Navona. After two weeks of having a scoop a day through central and northern Italy, I can now officially declare the gelato from Gelateria dei Gracchi my  favorite.  I had stracciatella on all but two regretful days and the one at dei Gracchi was creamy but airy, and the chocolate chucks were huge and dark.  Our stop was a complete fluke, but I looked them up after I got home, and they usually make the “best gelato in Rome” short list. The Navona location is one of four shops gelateria in Rome and I’m sure all four are equally good. 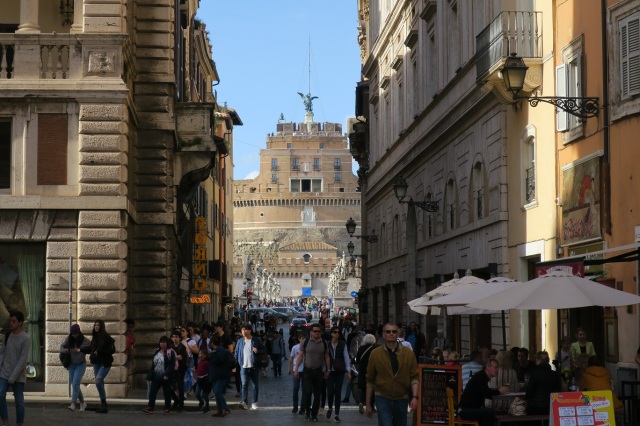 We ate our gelato as we made our way down Corso Vittorio Emanuele. Not too much longer and we spotted the Ponte Sant’Angelo and the castle on the other side of the Tiber.

During every Rome visit, I tell myself I’m going into the Castel Sant’Angelo, a museum that was originally built in ca. 134 CE as a tomb for Emperor Hadrian.  I haven’t made it yet.  This time, it was early evening and still open (it’s open until 7:30 pm) but I decided that I was too exhausted to do it any justice. I’ll do it next time I’m in Rome. And I know there’ll be a next time in Rome, because I threw a coin into the Trevi Fountain too. 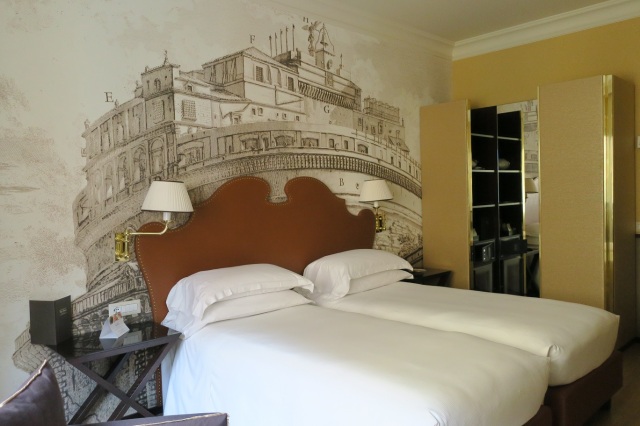 In Rome, we stayed at the Starhotels Michelangelo (I think it’s part of a Starhotels chain), a block from the Vatican. It was, overall, my favorite hotel of the trip — well located and with the most comfortable beds ever.