Communing with the Caesars: the Colosseum & the Forum

Posted on May 5, 2018 by thehistorytourist

Fun fact: At least one eye-witness account of Patrick Henry’s “Give me liberty or give me death” speech has Henry saying “Tarquin and Caesar had each his Brutus, Charles the First his Cromwell, and George the Third may profit by their example!” The Tarquin Henry references is Tarquin the Elder, who was assassinated by his predecessor’s sons in 578 BCE.  He was #5 out of the seven kings of ancient Rome.

Rome’s early history can be divided into three parts, based on its government.

(1) The Roman Kingdom began (says legend) with an Alban (in central Italy) prince named Romulus founding Rome in 735 BCE. Legend also says that he was the son of the god Mars, was raised by a wolf and killed his twin.  I’ll leave it to you to decide which parts of his story you believe. The kingdom survived until 509 BCE, when the overthrow of king #7, Lucius Tarquinius Superbus, ended the monarchy.

Below is one (in Sienna, Italy) of many  iterations of the Capitoline Wolf, a statue depicting Romulus and his brother, Remus, suckling on a wolf. The original is a circa 12th century work now in the Capitoline Museums in Rome. 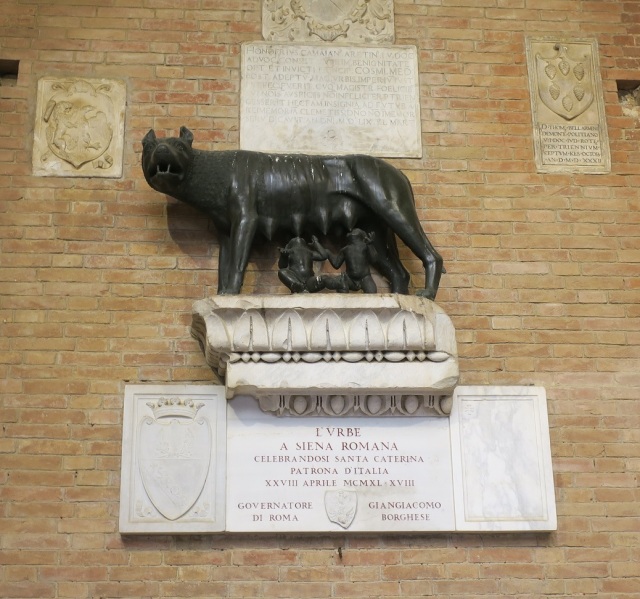 (2) The Roman Republic (509 BCE to 27 BCE) was Julius Caesar’s Rome, characterized by (some) officials being elected by (some) people, including the plebes. But as we know, people can’t play nicely forever.  So eventually there came a struggle for individual power, of which Caesar was the victor.  And that marked the beginning of the end of the Republic. 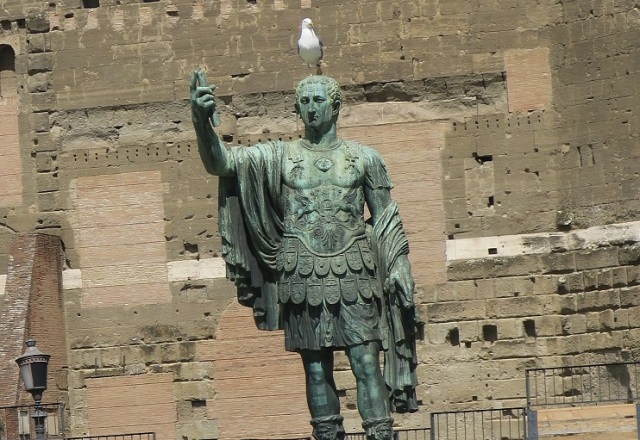 (3) Caesar was killed in 44 BCE and after some in-fighting amongst those left behind, Caesar’s great nephew, Octavian, came out on top. Octavian became the first of the Roman Empire emperors, in 27 BCE. The empire survived Caligula and Nero but eventually succumbed to irrelevancy. The winds of military and commercial power had shifted east, anchored by Constantinople, and while others claimed the title after him, Romulus Augustus (deposed in 476) is generally recognized as the last emperor of Rome.

After St. Peter’s, we were bused to the Colosseum, the most famous remnant of the Roman Empire in Rome.  It’s a giant amphitheater that was built in the 1st century, as a site for public entertainments. You’ve probably seen the movies set at the Colosseum, where chariots are raced, the unfortunate are fed to hungry animals and Nero gives a thumbs up or down to the losing gladiator.

The Encyclopedia Britannica says that it held about 50,000 people.  Originally called the “Flavian Ampitheater,” after the emperor who built it, it became known as the Colosseum because it stood next to a large bronze statue of Nero, called the Colossus.  The last of the gladiators fought there in the 5th century, and it was used for various purposes — factory, housing, cemetery — through subsequent years.  These days, the Pope conducts Good Friday services there.

I found it a depressing place.  Even with the brightness and noise of modern Rome swirling around it and a crush of tourists in it, heaviness and sadness permeates the space.  Look down at the remains of the underground cells and you can sense overwhelming suffering, human and animal.

The Colosseum was the end of our guided tour. While the  majority of our tour group took the bus back to the hotel, a handful of us broke off to do our own thing. Patricia and I decided to take in the Roman Forum, which was included in the price of the Colosseum ticket.

The Forum was the downtown area of ancient Rome, where many of its important temples and government structures were built starting about the 7th century BCE. It was the center of Roman life until the fall of the Roman empire scattered Romans to the burbs.  Fourteenth century Pope Urban V’s interest in ancient Roman monuments and buildings is credited for its preservation. 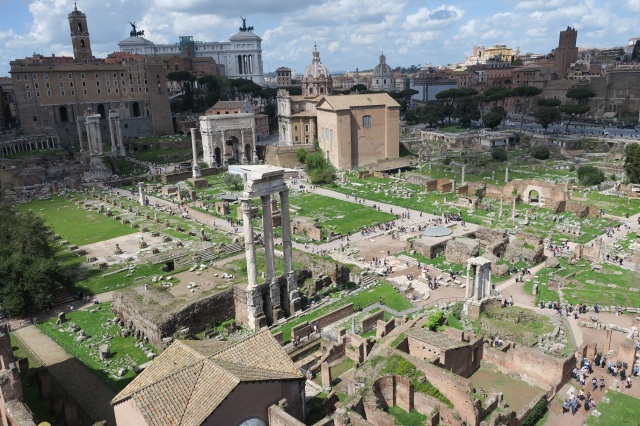 We entered the Forum at an entrance across the street from the Colosseum, which was actually the access to the Palantine Hill.  The original Rome was built across seven hills, of which the Palantine was one.  It was where everyone who was anyone, including the kings and emperors, lived. An underground tunnel connected the emperor’s palace on the Palentine to the Colosseum so that the emperor could suddenly appear in his Colosseum box, like the god he was.

Today, there are some remnants of palaces and some beautiful gardens. The Museo Palatino, with its ancient Roman artifacts, is there.

The Palantine Hill and the Forum are in contention for my favorite tourist sites of our Italian trip. The gardens on the hill were in bloom and, in contrast to the crowded bustle of the rest of the city, serene.  Also, there was enough of the temples and other buildings in the Forum to get a real feel for the Rome of the Caesars.  Walking through the Forum on the Via Sacra, the main road through ancient Rome, I could feel the pounding feet of hundreds of soldiers and captives and horses in the triumphant parade of Roman generals returning from victorious battles.  It was, no lie, thrilling. 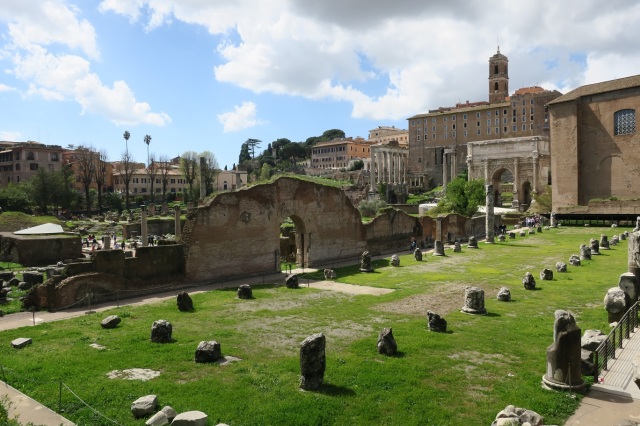 We could have spent all day — several days, actually — at the Palantine Hill/Forum complex. But we only had half a day left in Rome and we’d already spent more time than we’d allotted. So it was a quick march down the Via Sacra, then out to the rest of Rome.

Gallery | This entry was posted in Italy Rome. Bookmark the permalink.

2 Responses to Communing with the Caesars: the Colosseum & the Forum