For Whom the Bell Tolls (for Students at the University of Arizona, that’s who)

Posted on February 12, 2017 by thehistorytourist

US Army Captain Wilber (Bill) Bowers was in the shipyard at the Puget Sound Naval Station in Washington, in 1944, looking for “something to signal gunmen with,” according to one newspaper account. What exactly what that would have been, I don’t know. And it doesn’t matter.  He’s our person of interest not because of that “something,” but because he was the right person in the right place at the right time.

During his shipyard visit, he was shown, by the shipyard keeper, a bell in a wooden crate — a bell that was one of two salvaged from the USS Arizona, the US battleship that was sunk during the Japanese attack on Pearl Harbor. It, made from silver and copper mined in Arizona, was slated to be melted down. I wonder who though that was a good idea.

That’s where it was when I was an undergraduate at the University of Arizona, in the late 70s. We could hear the bell ringing, but we couldn’t see it, because the bell was encased in the solid brick tower.  In 2002, a new student union, with a new, more open bell tower, was completed. Now everyone can see the bell.

I went back to the University campus, last Friday, for the first time since I graduated, to see the bell and the USS Arizona Mall Memorial, a memorial to those who died on the Arizona. The memorial was dedicated last December, on the 75th anniversary of the sinking of the ship. It consists of a full scale outline of the USS Arizona (597 feet long and 97 feet wide), on the mall in the center of campus, and long brick walls embedded with 1177 brass plaques, one for each of the men who died aboard the Arizona. 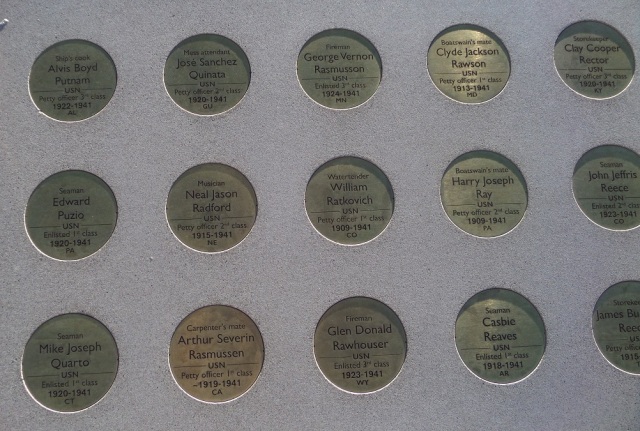 Captain Bowers has the official University of Arizona imprimatur when it comes to bell saving.  However, someone else has also staked a claim to the bell-saving title. Retired naval officer Hves Primeaux, of California, said that he was the one who discovered the bell, two years before Bowers, while searching for a refrigerator in the same shipyard. He said he had wanted the bell to be sent to Hawaii, to be part of a yet-to-be-built memorial there. But before anything could be done about that (he had two years…just sayin’) the shipyard’s command changed and it was sent to the University of Arizona instead.

You snooze, you lose.

The second bell salvaged from the Arizona is at the USS Arizona Memorial at Pearl Harbor. There doesn’t seem to be a saved-from-the-brink-of-death story associated with that one.

There are several USS Arizona memorials and salvaged artifacts scattered throughout Arizona. I might have to do a USS Arizona road trip to see all of them.

Gallery | This entry was posted in Arizona and tagged Bill Bowers, University of Arizona, USS Arizona. Bookmark the permalink.

2 Responses to For Whom the Bell Tolls (for Students at the University of Arizona, that’s who)