Posted on November 4, 2016 by thehistorytourist

A pint-sized Dracula stood at my door.  “I want blood.”

“Sorry, all I’ve got are Kit Kat bars,” I said, dropping one into his open bag. He mumbled his thanks and, more mouse than bat, scurried off into the darkness.  Candy. Blood. It’s all the same, it seems, to Gen Z vampires.

Monday was Halloween, the annual event that brings together an unlikely alliance of blackmail, the candy industry, and the dead. I dutifully handed over sweets to the urchins who found their way to our house.  There were only eight of them, total, which was a bit disappointing. On the east coast of the US, Halloween is more of a thing. Arizona … not so much. 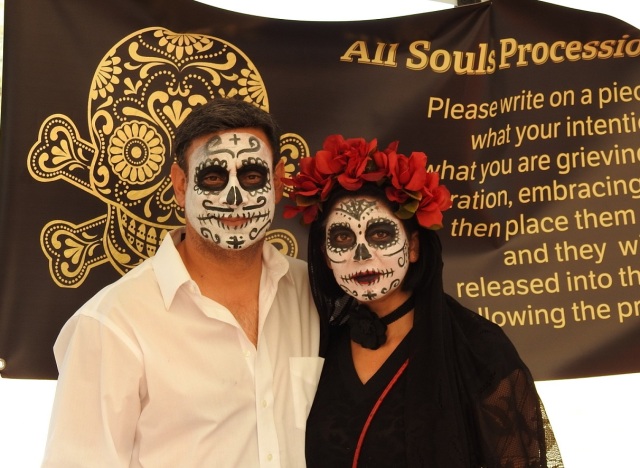 Instead, the events in late October/early November focus on Dia de (los – if you want to Americanize it) Muertos, or Day of the Dead. Culturally, Day of the Dead is Mexican, but it’s spread internationally. In Arizona, which was a Mexican colony until the Gadsden Purchase brought them into the United States in 1853, it seems to be more popular than Halloween.

The Day of the Dead (which are actually the days of the dead) is November 1 and 2, when the dear departed come back to earth to celebrate with loved ones.  It’s in early November because when the Spanish brought Catholicism to Mexico, the Day of the Dead got blended with All Saints and All Soul’s Days. But originally, it has nothing to do with the Catholic calendar — it was an Aztec celebration long before the Catholics showed up.  The festivities go on for days and days and unlike the mourning and sadness that that accompany US Anglo death rituals, the Day of the Dead is about joy and gratitude. The dead do not like mourning and sadness, goes Day of the Dead tradition. The dead like to par-tay!

Mr. History Tourist and I — not opposed to partay-ing with the dead — went to a couple of Day of the Dead festivals last weekend.

The first was at the Tohono Chul Botanical Garden and Art Gallery, just a couple of miles from us. The event was called Chiles & Chocolates & the Day of the Dead, and it was more of a culture and arts festival than a Day of the Dead fest. There was upscale eats featuring chiles and chocolate, and booths selling Day of the Dead themed arts and crafts.

There was also music. A giggle-worthy moment came when I realized I was listening to a high school steel drum band playing Jai Ho at a Day of the Dead event. 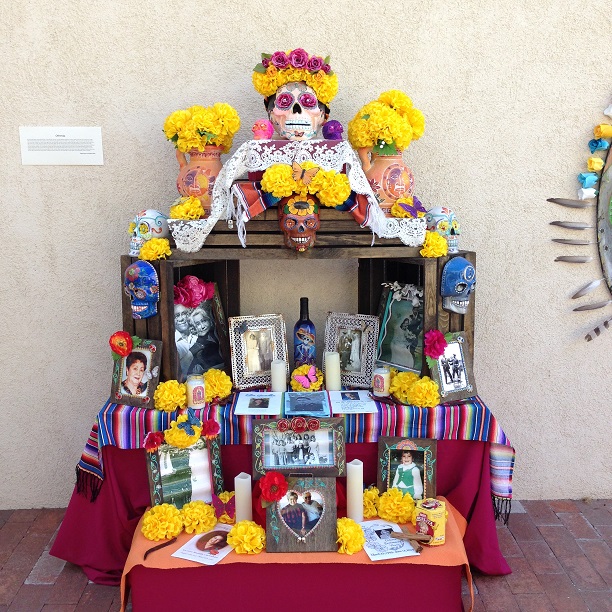 In the art gallery were several ofendas. An ofenda (Spanish for offering) is an altar set up to honor and remember (not worship) ancestors. Many other cultures — I’m thinking Asian in particular — have them. On it are photos of the family’s departed, and food, flowers and other gifts. One of the ofendas had pieces of paper on which we could write our wishes for our departed loved ones, and a bowl in which to leave it.  The papers are ritualistically burned later. We could also leave gifts for the departed. I sent my love to my mum, and left an after-dinner mint I’d gotten from a DC restaurant a couple of months ago.  Sad as it was, it seemed a better offering than the only other gift-worthy object I could find in my purse: used chap stick.

Wandering the gardens were staff representing the Day of the Dead symbols: the calaca (a skeleton) and the calavera (a skull). Having one’s face painted to look like a calavera is a Day of the Dead tradition. I’ve heard people worry that it’s “cultural appropriation” if non Latinos do it but around here, everyone does it and folks take it as it is meant: an appreciation of the sentiment, art and culture it represents.

The next day, we drove about 60 miles south, to the tiny town of Tubac, Arizona. Tubac was also having a Day of the Dead festival, but one much more traditional than the one at Tohono Chul. The day before, food-wise, Tohono Chul served pasilla negra dark chocolate and Mayan Mesquite honey white chocolate truffles. It was the half-caf vente soy mocha latte of chocolate candy. Tubac, on the other hand, had tamales.  Regular tamales. The official food of the Day of the Dead.

Tents set up on the grounds of the Tubac Presidio State Historic Park, which sponsored the event, sold crafts. They also had people who did Day of the Dead face painting, so that by the time the Dead of the Dead procession was ready to roll in late afternoon, every face in town was appropriately decorated (except ours — we showed up too late to get anything done).

Uptown Funk, played by the Nogales High School Band, accompanied our procession the three blocks from the Presidio to the Tubac town cemetery.  The band led and the rest of us trailed behind, holding large paper flowers we’d been given to place at the graves. At the cemetery, the band made one swing through the graves before marching out and heading downtown. It marched up and down the streets of city-center Tubac (which took all of about five minutes) and finished in front of an art gallery, where a large bonfire was lit. In that bonfire went all of the intentions written by parade participants and carried in a large cauldron at the front of the procession.

Tucson’s Day of the Dead parade is this Sunday and I hear that it’s a huge event, with thousands of people. I don’t do well with crowds, so I doubt we’ll be going. I loved the small town, traditional feel of the Tubac celebration, and I think it will be the official History Tourist Day of the Dead event. Next year, we’ll get there earlier and have time to visit the Presidio. And get our faces painted. And gather flowers. And eat tamales. And dance to Bruno Mars with the dead.