Posted on January 18, 2016 by thehistorytourist

Kathie assures me that we visited the 1784 Governor John Langdon House. It had an oval dining room, she says. It had extensive gardens, she says.  But honestly, I don’t remember a thing about it. I’ve looked at the photos on its website (we weren’t allowed to take interior photos ourselves —  as with the rest of the houses in this post — which may be part of my problem) and absolutely nothing is jogging my memory. But I have a photo of its exterior (at least, I think this is the Langdon house), so I must have been there — right? 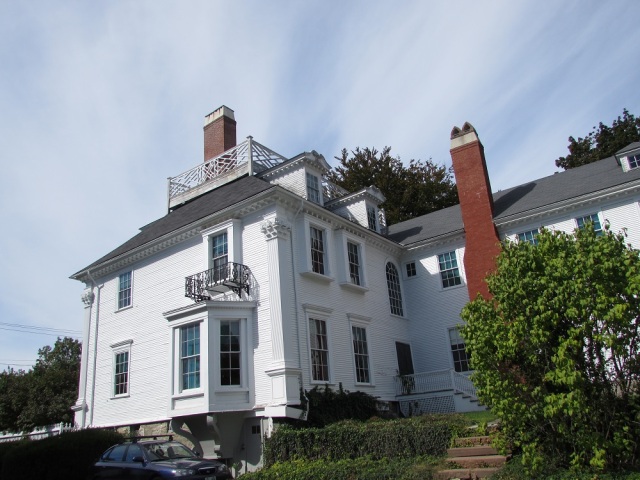 It’s odd that I don’t remember it, because this was another stalking George Washington opportunity. It’s where George Washington stayed while in Portsmouth on his New England tour of 1789. He wrote in his diary: “Portsmouth, it is said, contains about 5,000 inhabitants. There are some good houses, (among which Col. Langdon’s may be esteemed the first).”

John Langdon was a ship owner, US founding father, signer of the US Constitution, US Senator and governor of New Hampshire. It was John Landon, as president pro tempore of Congress, who got to write to George Washington, on April 5, 1789: “I have the honor to transmit to your Excellency the information of your unanimous election to the Office of President of the United States of America. “

Today is Martin Luther King Day and a popular MLK quote is this: “The time is always right to do what is right.” What does that have to do with the Langdon house? The quote applies to John Langdon.

When Martha Washington’s enslaved lady’s maid, Ona Judge, ran away and ended up in Portsmouth (speculation is because the captain of the ship that sailed between Philadelphia and Portsmouth was known to be an abolitionist), Langdon helped her evade her captors. Or at the very least, he did nothing to help them. Langdon may have been a FOG (friend of George), but he wasn’t going to be complicit in the return Ona to slavery. She married a sailor and lived out her life — free — as a seamstress in a town near Portsmouth. The time is always right to do what is right.

For this was Governor Wentworth, driving down
To Little Harbor, just beyond the town,
Where his Great House stood looking out to sea,
A goodly place, where it was good to be. (Lady Wentworth by Henry Longfellow) 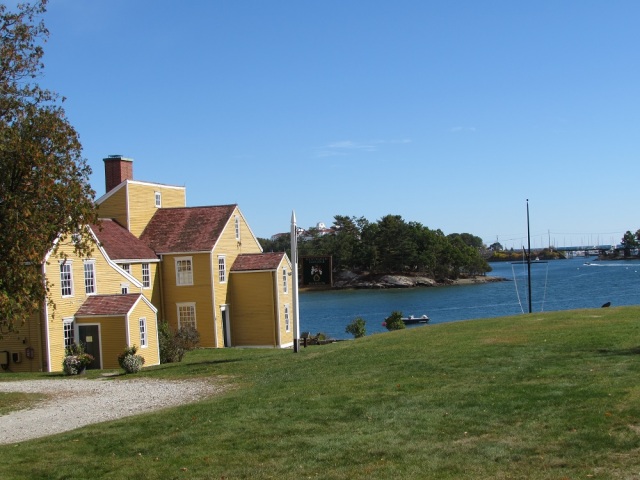 The Wentworth in Wentworth Coolidge is Benning, brother of Mark of the Wentworth- Gardner House from my last post. Benning bought 100 acres in 1750 and cobbled together a house from existing buildings. Which is why I liked it so much: it has an odd, fun-house quality. Stairs go up and down for no reason, and some lead to nowhere. Rooms appear and floors shift unexpectedly. Benning was a royal governor of New Hampshire, and the house functioned as an official governor’s house for a bit. So the rooms range from a fancy council chamber to comfy cosy sitting rooms.

After his wife died, Benning, aged 64, married his much younger housekeeper, to the horror of Portsmouth society. They must have been particularly peeved when she became the sole heir of his considerable wealth.  Henry Longfellow wrote a poem about the marriage, called “Lady Wentworth.”

The Coolidges were a wealthy, artsy Boston family who used the house for a summer retreat, from the late 19th to mid-20th centuries. They, I’m sure, added to the boho feel of the house.

After Wentworth Coolidge, we drove across the Piscataqua to South Berwick, Maine. It’s about 25 minutes from Portsmouth.

The Hamilton House is a circa 1785 Georgian mansion on the Salmon Falls River built by shipping magnate Jonathan Hamilton. It was extensively renovated by (and has been left in the Colonial Revival style of) its last private owners, Emily and Elise Tyson. Emily Tyson was the widow of the president of the Baltimore and Ohio Railroad and bought the house in 1898, as a summer retreat. After her death, her step-daughter, Elise, continued to summer there with her husband and at Elise’s death in 1949, it was bequeathed to Historic New England.

Its Colonial Revival garden is a popular place for weddings. There was one happening when we were there.

The sad thing about our visit to the Portsmouth houses was that Kathie and I were the only ones on the tour at every single house. These private tours were nice for us, but it makes me wonder the about the future of the museums.

Gallery | This entry was posted in Maine, New Hampshire. Bookmark the permalink.