Posted on November 9, 2015 by thehistorytourist

After the botanical gardens, we headed to the one history museum in New Orleans on our schedule: the Cabildo.  It’s one of nine historic properties that make up the Louisiana State Museum system.

The Cabildo is a Spanish colonial building next to St. Louis Cathedral, on Jackson Square. Cabildo is Spanish for a council that governs a municipality, and the Cabildo was built in the 1790s, when the Spanish ruled Louisiana, as a municipal building (a mansard roof was added by the French, later).  The Louisiana Purchase transfer ceremony took place there in 1803.

After the Civil War, the Cabildo housed a courtroom and it was there that the Plessy v. Ferguson case started (it eventually went all the way to the Supreme Court). Plessy v. Ferguson, for the non-Americans, was an 1896 legal decision that upheld racial segregation and codified the separate but equal policy.

Homer Plessy was an octoroon (1/8 black and 7/8 white, and therefore black according to Louisiana law) who bought a first-class train ticket in New Orleans and proceeded to sit himself in the whites-only first-class railway car.  For that, he was arrested for violating the Separate Car Act, which required him to sit in the blacks-only railway car. His argument, in court, was that segregation — which forced blacks to use services different from whites — violated the 14th amendment, which guaranteed equal treatment under the law.  The Supreme Court ruled that just because services and accommodations for whites and for blacks were separate didn’t mean that they weren’t equal.  Insert eye roll here.

Since 1908, the Cabildo has housed part of the Louisiana State Museum’s collection.  I thought about using it as my Halloween ghost post, because an unusually large number of its objects have to do with death or spirits or something otherwise Halloweeny.

The Cabildo’s most popular object is this painting, purported — no one knows if it really is — to be of Marie Laveau (1794-1881), who was known as the voodoo queen of New Orleans. The story goes that painter George Catlin (famous for his mid 19th century paintings of Native Americans and the American west) met her and asked her to sit for a portrait. She said no but he went on to paint her anyway, from memory. The Catlin — and another “no one knows” is whether it was really painted by Catlin — portrait ended up with the Louisiana State Museum which, at some point in the early 20th century, sold it to art collector Simon Shwartz. That original has been lost. The one now hanging in the Cabildo was a copy made in 1922 by Louisiana State Museum resident artist Frank Schneider. 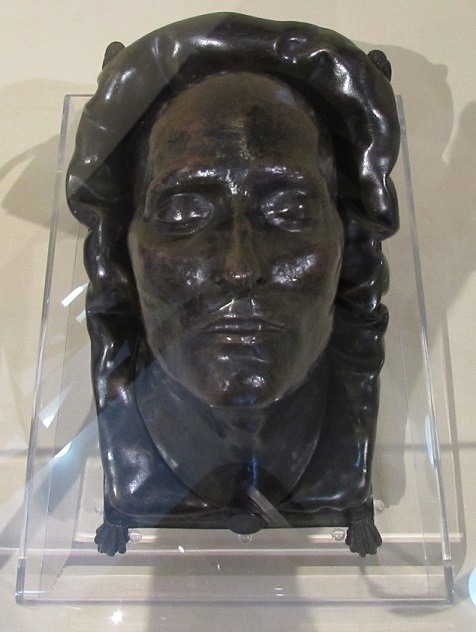 Another popular object in the collection is Napoleon’s 1821 death mask.  It is attributed to (though its origins, too, is not without some controversy) one of Napoleon’s physicians. The physician was attending Napoleon when Napoleon died and the physician made the mold a few hours later. He — the doctor, not the dead Napoleon — eventually moved to New Orleans  and presented the mask to the city in 1834. 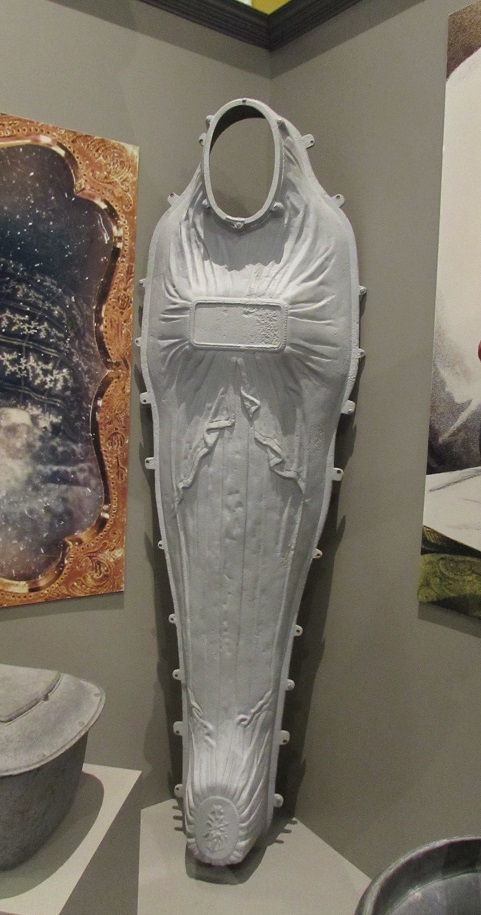 This (for me) was the creepiest object in a room full of creepy objects about the many yellow fever epidemics that tore through New Orleans: a lid from an 1856 cast iron casket. The hole where the face would be, that probably had once been covered with glass, is just… shudder. Just being in that room made me nervous.  I took the photo and walked, very fast, out of there.

That’s the end of the New Orleans posts but before we leave, one more restaurant review. Between the botanical gardens and the Cabildo, we had a very late lunch at a French Quarter restaurant called Kingfish. That’s the nickname of a colorful, populist early 20th century governor of Lousiana, Huey Long (1893-1935).  My entree was just okay, but what was really memorable was the bread pudding. The pudding wasn’t overly sweet and the caramel sauce over it was perfection. Best. Bread pudding. Ever.