New Orleans I: It Begins and Ends in a Restaurant

Posted on October 28, 2015 by thehistorytourist

Finding a place to eat in New Orleans means having a conversation about g-strings first.

“You should have been here yesterday,” said the waitress at one likely restaurant. She expanded as we looked over the menu. “It was wild! There were naked men in here.”

I looked askance at the restaurant’s cloth covered chairs. Mr. History Tourist was beyond horrified. He’s by no means a prude, but he is rather OCD about sanitation. “How is that even allowed?”

“They had g-strings on,” the waitress clarified. 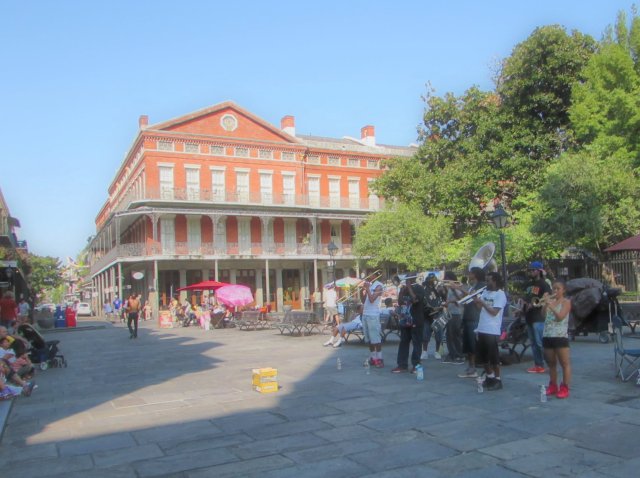 It ties for third place with Charleston on the list of my favorite cities (DC and London are one and two).  It’s fun, romantic, spooky (in a good way) and historic while also being trashy, gritty, dirty and scary (in a not-so-good-way).  An odd thing about it is that no matter how many tourist t-shirt stores it has — and it has a Key West-ish amount — it never seems cheesy.

The first time I was there was to visit my friend Kathie of New Hampshire.  I was a freshman at the University of Arizona and she was stationed in New Orleans with the Coast Guard. We were both 18. I don’t remember much about that trip, except the Hurricanes at Pat O’Brien’s (18 year olds drinking in bars was/is legal in Louisiana).  But I think I can safely say that we did not see any historic sites during my visit.

I’d been there numerous times since and hit all of the historic sites at least once, so we agreed that this visit would be a Mr. HT-centric one. Less museums and schedules – more wandering and spontaneity.

We got to New Orleans in late afternoon, checked into our French Quarter hotel (the Bourbon Orleans; it’ll get its own post later), then went straight out to do some exploring. Our first stop was Jackson Square, right behind our hotel.

New Orleans was founded by the French in 1718. They named the town after the then-ruler of France, Phillippe II, Duc d’Orleans, regent to his eight-year-old cousin, Louis XV. Fun facts about Phillippe II: (1) he called his wife (who he hated) Madame Lucifer; and (2) his body and heart were buried separately. Who knew that was so common (see also: Robert the Bruce).

Also around 1718, a Catholic church was built on the site of what is now St. Louis Cathedral and a public space grew in front of the church. The space was called the Place d’Armes and it was where the army drilled and the government executed criminals. Then

In 1814, we took a little trip,
along with Colonel Jackson down the mighty Mississipp.

It was the end of the war of 1812 and Andrew Jackson was there to push the British out of the area. It took him a bit of time but he did it.  And for that, Place d’Armes was renamed Jackson Square, after the hero of the Battle of New Orleans.

Jackson Square is a microcosm of the French Quarter. We looked at the paintings displayed along the wrought iron fence circling the square, listened to some traditional jazz and an untraditional electric bass kora, watched a steamboat kick off from the banks of the Mississippi, window shopped and people watched.

The quality of street entertainers in New Orleans is rather amazing. “I know him,” said Mr. HT after he’d bought a CD from Jonah Tobias, the street performer who was playing the bass kora (a large stringed African instrument). “He plays on some of the New Age CDs I have.” Yes, I feel secure enough with you to reveal that I am married to a man who listens to New Age music.

By the time we were done with Jackson Square, we were ready for dinner. I dragged Mr. HT to the Acme Oyster House, which has always been a reliable go-to in New Orleans. This time, it was a huge disappointment: the food and service were indifferent. And in a city known for its food, there’s no reason to settle for the adequate. So farewell Acme, hello new (but not naked) gastronomical love.

9 Responses to New Orleans I: It Begins and Ends in a Restaurant