Posted on September 1, 2015 by thehistorytourist

The guys were right, at least about the location.  A block later, we were at Stonewall Jackson’s Headquarters, in a Gothic Revival house built in 1854.

Stonewall Jackson was commander of the Shenandoah Valley District of the Provisional Army of the Confederate States when, in November 1861, he was loaned a house by Lieutenant Colonel Lewis Tilghman Moore, a Virginia Militia commander.  Jackson’s wife, Mary Anna, soon joined him there and they lived in Winchester until March 1862.  Winchester must have improved in the 100 years since Washington’s tenure. The Jacksons loved it and mentioned retiring there someday. 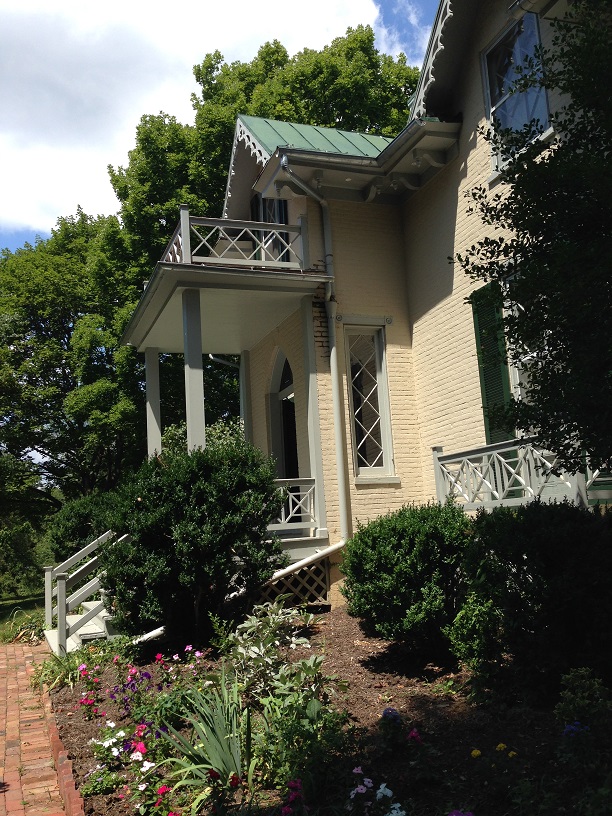 Colonel Moore is the great great grandfather of actress Mary Tyler Moore and she has contributed in a significant way to the restoration of the house.  “Young people have no idea who she is, nowadays,” said our guide, an elderly woman in a 19th century costume.  “But you know, don’t you?” We stegosauri nodded.

Jackson sent a letter describing the house to his wife, before she joined him.”The walls are papered with elegant gilt paper. I don’t remember to have ever seen a more beautiful papering,” he wrote. That prompted Mary Tyler Moore to have the wallpaper recreated for the house.

There are a few Jackson items in a room set up with museum-like exhibits but, for the most part, the objects in the house are period but not Jackson.  Some of the furnishings came from the Robert E. Lee estate.  “That bed,” said the tour guide in one of the bedrooms, “and the rug.”

It was a blue and white cotton rug that I would have guessed was Ikea.  Still, those of us who had been standing on it jumped off.  A rug from the Robert E. Lee estate and they didn’t care if we stood on it? There was something suspiciously unmuseumlike in that policy.

My favorite object in the museum was completely unJackson-related: a Revolutionary War uniform.  It was worn, into the Battle of Manassas, by the great grandson of the man who had worn it during the Revolution. 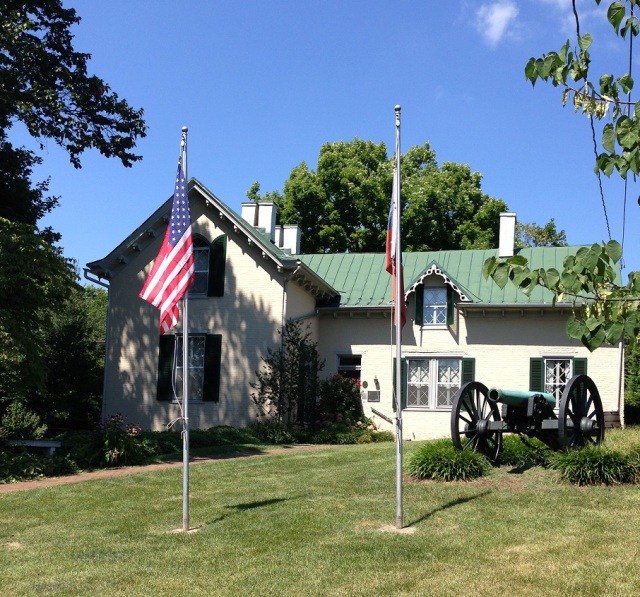 I admit I have a bias against museum guides in costume.  I like museums.  I like (good) guides.  And I like costumes.  But I don’t like them all together.  I just don’t see a person in a hooped skirt as a legitimate purveyor of historic facts.

So when our guide, looking like an extra from Gone with the Wind, said that Jackson was “Lee’s most brilliant strategist,” then repeated it several times, I thought, “Really?” I know that it’s a popular line of thought, but I’d expected a little more nuanced interpretation from a museum.  He was also, according to her, the world’s best husband and father.  He had only one child who lived to adulthood.  “He’s a man who should have had dozens of children,” she trilled, “because he was just wonderful with them.”  She did, however, admit that General Barnard Elliott Bee may not have intended it to be a compliment when he gave Jackson the moniker “Stonewall.”

Patricia was less fascinated by the interpretation bias than I.  We were an hour and a half into a 45 minute tour and she was in full, teeth-baring History Tourist Feed Me mode.  One more Jackson superlative and she’d have take down Miss Pittypat in a full frontal assault.  So we made our escape as quickly as we could, forgot about the Fort Loudoun well and headed back to the downtown pedestrian mall to hunt for a meal.

5 Responses to Lee’s Most Brilliant Strategist?