Posted on June 18, 2015 by thehistorytourist

“You have to be careful,” warned Kathie. “They encourage you to go into houses and rummage around. But if they find you in their house, they’ll challenge you on it. They speak in 17th century English and it’s intimidating.”

She was talking about Plimoth Plantation, a living history museum that recreates life as it was for the English colonists who arrive in Massachusetts in 1620, on the Mayflower. I’d read similar comments about Plimoth, on various trip review sites. Plimoth takes their history, and historical interpretation, very, very seriously. Their interpreters each embody a real-life colonist and they stay strictly in character – no acknowledgement of or straying into the 21st century. And woe be to the visitor who deviates from this 17th century norm.

But I was forewarned so this, I decided, could be fun.

I would rummage through drawers and cabinets and if caught, say that I was looking for valuables to pilfer. Then I’d ask to capture their soul in my flashing black box.  I sincerely hoped that would result in me being the center of my very own Crucible-like drama.

Alas, none of that happened.

The museum must have gotten enough negative feedback to decide to tone down their Puritanesque application of historic interpretation because the interpreters we encountered were all pleasant, informative and accommodating.  They were still 17thcentury, but in the usual historical interpreter way – wink, wink, nod, nod. 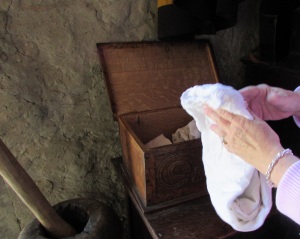 Priscilla Alden didn’t seem the least bit fazed when we wandered into her house to ask her about her new roof (her husband, John, just put it on) and her garden (she uses many of the plants for physick).

We made ourselves at home in one empty house.  We bounced (gently) on their bed, moved their amour, and tried on some of their clothing. No one came in to accuse us of trespassing during our free-for-all, however.

My favorite parts of the museum came before the English settlement. In the building where the ticket center, intro film and gift shop was located, was an exhibit area where the crafts people worked – they who make the reproduction products that furnish the village and are used by the interpreters at the museum.  We spoke at length to a First Nations Canadian who was making head dresses for the staff in the Wampanoag Homesite. 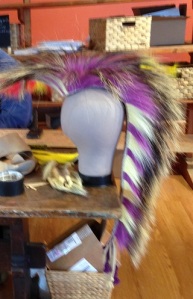 This is a head dress made of porcupine and deer.  I said that it reminded me of a Hawaiian head dress.  The artist said that he thought there were similarities about head dresses through time and across cultures. Someone had mentioned to him that his head dresses reminded them of Roman centurions.

After leaving the craft area, we had a short walk up a hill to a site built to resemble a Wampanoag village. The Wampanoag were the people who, pre-English, occupied the area that’s now the lower New England states.

The staff in the village are Native – on that day, all but one was Wampanoag – but not role players. They wear 17th century clothing and engage in 17th century tasks, but present as 21st century people there to teach about Wampanoag history and culture. We spent most of our time speaking with and watching a woman who was finger weaving a bag. I got so interested that I bought a book about finger weaving after I got home, and found a traditional figure weaving workshop that is taking place in West Virginia in October, that I might attend.

I enjoyed our time at Plimoth very much – much more than I expected, in fact.  I wasn’t that enamored of Jamestown Settlement, a similarly reproduced colonial village/living history museum in Virginia, so I thought this might be much of the same.  I think my enthusiasm with Plimoth had to with their staff.  I found the Plimoth staff knowledgeable, enthusiastic and engaging and so was completely engaged by them.

My only disappointment was that no one accused me of sorcery. But we’d be on to Salem the next day, so there was still hope.