The Morning He Died

Two physicians, who were in the audience at Ford’s Theatre on April 14, 1865, attended Abraham Lincoln after he was shot.  The wound, they determined, was mortal, and there was nothing to do but try to make Lincoln comfortable while he died.  Getting him back to the White House would have been rough going, so they moved him to a house across the street.  I wondered why, among all the houses in the area, the boarding house owned by tailor William Peterson and his wife, Anna, was chosen. I couldn’t find anything online so if anyone knows, please tell me. 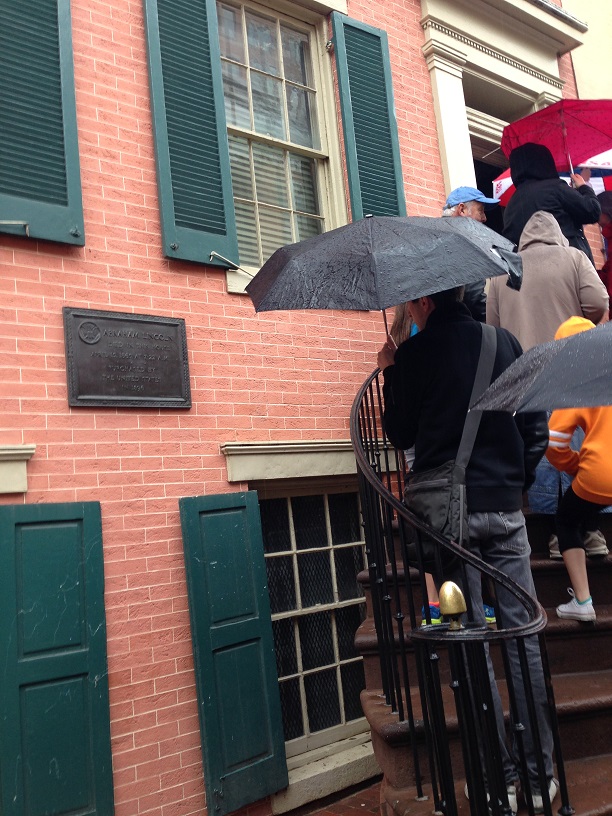 Cold and grumpy after the non-event at Ford’s Theater, I was on the fence about doing anything else.  Why not hole up in a bar and have a nice hot toddy, I thought.  Patricia, I was sure, wouldn’t say no to a hot toddy either.  But I had never been to the Peterson House and this was the April 14, 2015. I could have a hot toddy any old day but to see the house 150 years to the day that Lincoln lay in it, dying, had too much of a pull.  We went to stand in another long, long line.

The house, the sign on it said, had belonged to the US government since 1896. It has been a museum, run by the National Park Service, since 1933.  A self-guided tour takes visitors through the first floor: the front parlor where Mary Lincoln sat with her family (above), a bedroom where officials conducted business (below), and the back bedroom where Abraham Lincoln died at 7:22 on the morning of April 15.

I’d always imagined Abraham Lincoln lying in a bedroom upstairs which, once I got into the house, I saw would have been oh-so inconvenient given the narrow stairs. He was laid (diagonally, because he didn’t fit on the bed otherwise) in a back bedroom on the first floor, in a room rented by a man who had gone out for the evening.

Most of the furniture in the house is 1865 period, but not original to the house. The originals were auctioned off after the Petersons’ deaths. The bed in the room where Lincoln died is a reproduction, the original being in the Chicago Museum of History. Someone bought it at auction for $80. Chicago collector Charles Gunther bought it from the someone – along with lots of Civil War related artifacts – and when he died, left it to the Chicago museum. 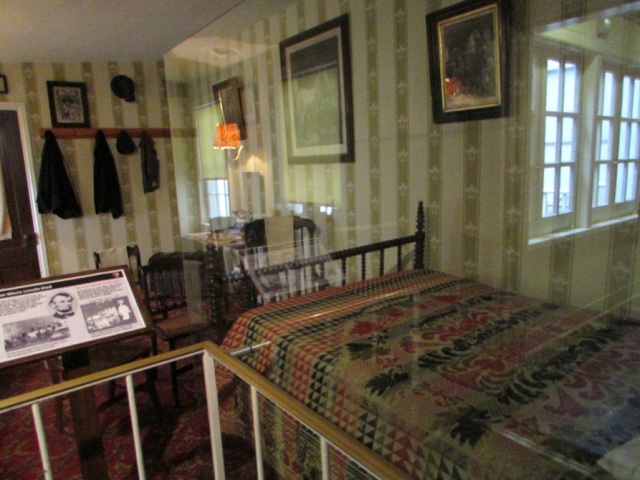 After shuffling through the first floor, our line moved into the adjoining building, which now houses the Ford’s Theatre Center for Education and Leadership. There are a couple of floors of permanent exhibits, and one special exhibits gallery.  For the 150thanniversary, the special exhibit was “Silent Witness,” a collection of items on or around Abraham Lincoln during the assassination. Blood stained clothing, including Lincoln’s overcoat, a flag used to wrap him in, the pistol used to shoot him: they were all there.

But so were what seemed to be hundreds of people, pressed into the small gallery.  As much as I wanted to see the items, it was just too much. A cursory run by the objects and I was out of there.  The exhibit runs to the end of this month, so I’m hoping to have a chance to go back again, when the rest of the world isn’t there.

By the time we got back out, the street, too, had become packed with people.  I am not a fan of crowds, so Patricia and I made a beeline out of there and to one of our favorite restaurants, about two blocks away.  It’s called Coco Sala and almost every dish contains cocoa.  No hot toddies but a cup of hot dark chocolate with orangerie whiskey was there to warm us right up.

If you’re into the fascinating but morbid, unlikely places hold other Lincoln assassination objects. The bullet that killed him, bits of his skull and the blood stained cuffs of a doctor’s shirt sleeves are on display at the National Museum of Health and Medicine in Silver Spring, Maryland.  A spur that John Wilkes Booth lost when it tangled with a flag on his leap out of the presidential box is a the United States Naval Academy Museum in Annapolis.  And a piece of John Wilkes Booth’s cervical vertebrae is at the Mutter Museum in Philadelphia.

10 Responses to The Morning He Died