Posted on March 19, 2015 by thehistorytourist

Davis-Monthan Air Force Base in Tucson, Arizona, has a 2600 acre facility on-base that locals call “the Boneyard.” It contains over 4000 obsolete aircraft, lined neatly “row on row” like a military cemetery.  “The Air Force doesn’t like us calling it the Boneyard,” said our tour guide at the Pima Air and Space Museum, across the street from the base. “They want us to call it the Aerospace Maintenance and Regeneration Group.” But of course the museum doesn’t because (1) tourists are only going to hear “Aerospace Mainte…” before they tune out and (2) “Boneyard” is so much cooler.

I’d passed the museum (and the Boneyard) hundreds of times – living in Tucson as an undergrad at the University of Arizona and visiting my father, who retired there – but I went in for the first time just a couple of weeks ago.  The museum has 6 large hangers/galleries plus 80 desert acres of planes dating back to World War II.  It was the 80 acres that gave me pause.  I always seem to be in Tucson when its 100 degrees in the shade and I wasn’t willing to fry in the cause of aviation history.  This time, however, I had a temperate early March day and Mr. History Tourist urging me on.  Mr. HT wanted to see a B-17.

The larger and newer aircraft sat outside.  It turned out that the area covered by the planes wasn’t as vast as “80 acres” would imply and could easily have been walked (an option), but we opted for their shuttle tour.  The tour is about an hour long and you’d think that I’d balk at being lectured about planes for that long, but I actually loved the tour and the hour flew by.  The guide told “backstairs” stories about the planes that don’t appear on their sparsely worded exhibit labels. After the tour, we walked back to the planes that we wanted to see closer up.

They have two planes that were used by the Kennedy and Johnson administrations as Air Force Ones.  They’re smaller than the Boeing 747s that usually carry the President and were used when there wasn’t landing space for a larger plane.  Johnson called the smaller one “Air Force One-Half.”  They’re both on loan (as many of the museum’s planes seem to be) from the Air Force Museum.  The part that broke my heart: they used to be allowed to give interior tours of the larger one but the Air Force decided that it was causing too much wear and tear and stopped it.

The hangers contained smaller and older planes. There was one hanger for WWII Pacific planes and one for WWII Europe.  My favorite story came from the Pacific:

Lt. Louis E. Curdes was flying his P-51 Mustang, Bad Angel, over Japanese-held Batan Island in 1945 when he noticed a Douglas C-47 transport with American markings heading toward Batan. As it got closer to the island, it started lowing its landing gear.  Curdes figured that it was an American plane that either had fallen into Japanese hands, or would fall into Japanese hands as soon as it landed on the island.  Either way, he couldn’t let it land, so he he shot it down.  But he shot it down carefully, first one engine then, as it began to lose altitude, the other.  It glided into the water. 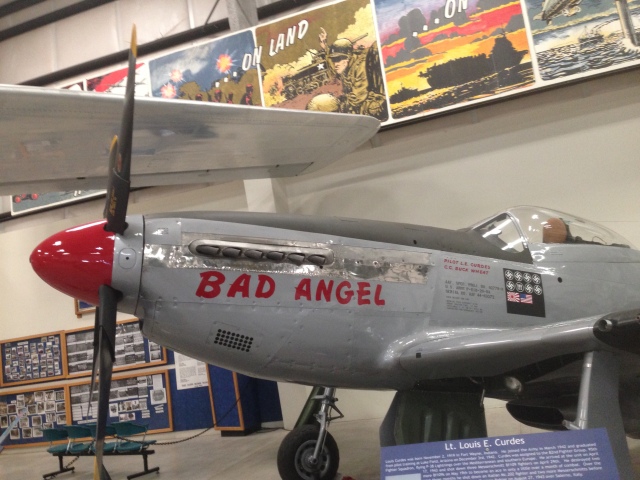 It turned out that it was still in American hands. The pilot had taken off from the Philippines, gotten lost, and was running out of fuel when he spotted the landing strip on Batan. If Curdes had not shot it down, the plane and its occupants would have been captured by the Japanese.  As it was, the 13 on board were rescued and Curdes received his Distinguished Flying Cross — the only one ever given for shooting down friendly aircraft — not long after.

Mr. HT’s B-17 was in the 390th Memorial Museum, dedicated to the 390th bomb group that flew missions over Europe and lost 714 men.  Technically, it’s an independent museum that just happens to be on the grounds of the Pima Air Museum.  Its literature says that I’ll Be Around is the only fully restored B-17 in America.  There’s also a hanger dedicated to the space program, which we skipped (because it was getting late and we had to be elsewhere).  The space hanger had simulators to ride, included in the price of admission, which probably would attract children.

We were there for 4 hours, which I would say is the minimum you need to do it justice.  Some other points:

– They run a bus tour of the Boneyard.  That requires an entirely separate process, including a separate ticket and some security hoops to jump through, since it requires access to a military base.

-We loved their café. It served lunch basics – soup, sandwiches, salads – but what we had were of an impressive quality.

-The facility is entirely dog friend.  They even let the dogs into the indoor exhibits. Other than the Wild Pony Museum in Corolla, North Carolina, it’s the only museum that I’ve run across that allows it.