Posted on March 12, 2015 by thehistorytourist

The western-most battle of the Civil War was fought about 45 miles north of Tucson, Arizona, in the shadow of a mountain called Picacho Peak.  (Trivia: picacho is big peak in Spanish, so Picacho Peak is Big Peak Peak.)

The Battle of Picacho Peak was more a skirmish than a battle.  Confederate Rangers were occupying Tucson in 1862 when a group of Union soldiers from California was dispatched to get them out.  In April, a handful from both sides – 14 Union and 10 Confederate – went scouting, met up at Picacho Peak and engaged.  After 90 minutes, three on the Union side were dead and three on the Confederate side were captured.  The Union retreated and the Confederates hustled back to Tucson to warn their comrades that the Union was on its way.

Each March, there’s a popular reenactment of the battle, involving far more than the 24 reenactors necessary.

That’s the “history” part and my excuse for this post.  The real reason for this post is to boast about our hike up Picacho Peak.

Picacho Peak is now part of a state park known for its spectacular spring wildflowers, its pristine camping grounds, and its hiking trails.  We’re not campers (actually, I am, but there’s no way I’d get Mr. HT to do it) and it wasn’t quite spring enough for the full wildflower effect.  But we are enthusiastic hikers and had missed out on hiking at the Grand Canyon because of a snow storm (more on that in a later post), so we went to Picacho Peak for the hiking.

The sign at the start of the trail — we took Hunter Trail, the shortest and most direct of the trails to the top — said that it was “difficult.”  But we’re regular hikers, so how difficult could it be?  And it was only 2 miles to the top.  Two miles.  Pfff. 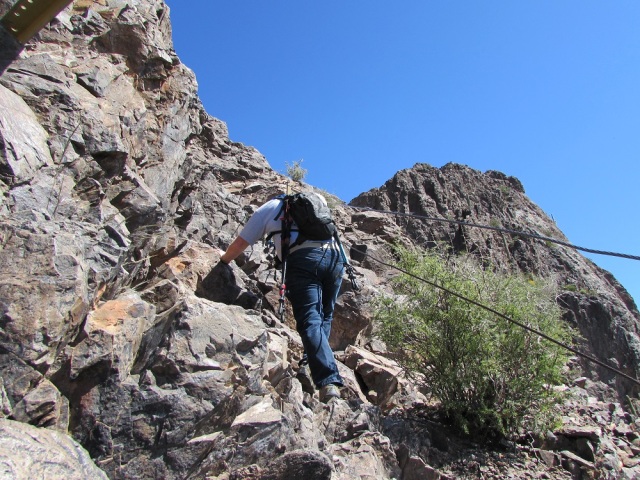 The second half of the climb was almost perpendicular, over lava-covered rock. There were cables to help us along, but it was still pretty intense. The rocks were either smooth and slippery, or broken and jagged, and lose stones covered what little flat surface there was. There was often no discernible path. One wrong step and we’d go plunging down 1500 feet.

That’s no joke, because one young couple did die, several years ago, though it was for lack of water and not because they fell off the mountain.  They hiked Picacho Peak on a 107 degree summer day with a 20-ounce bottle of water each and died of heat stroke.  And the really sad part was that their bodies were found quite close to the parking lot, so they’d almost made it back.

Mr. HT carried almost 3 liters of water in his camelback and that wasn’t enough.  Next time – and yes, we’ll probably do it again – I’ll carry my camelback as well.  Other things we’ll do differently: take more than a few pieces of fruit to eat, wear gloves (for protection on the cables), and wear more sunscreen. What we did right: started early in the morning and did it in cooler weather. 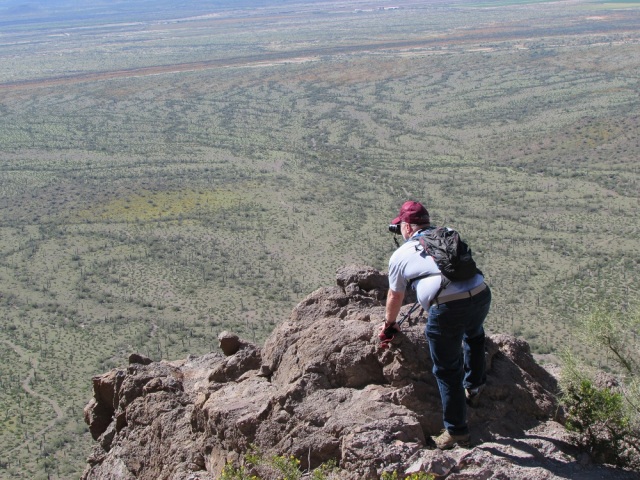 It took us 3.5 hours to get up to the peak.  There were fitter people who flew by us – younger and older – and I’ve read postings by some who claim to have done the entire round trip in an hour and a half.  I think the average is 2 hours up and 2 hours back.

The view at the top – and all along the way, really — was spectacular.  But for us, the real reward was successfully making the climb.

Our return trip took another 3 hours for a total of almost 7 hours on the mountain in all (and thus our climb through lunch and need for more food).  Climbing down was more difficult and scarier than climbing up.  But we did it, and survived, and are oh so proud of ourselves.