The Dukes of Durham

“So what are you doing tomorrow while I’m at work?” asked Lisa, a University of North Carolina (UNC) Chapel Hill sophomore.  She’s Patricia’s god-daughter and the reason for our extended weekend road trip to Raleigh/Durham/Chapel Hill.

“I didn’t want to tell her that we’re going to Duke,” Patricia confided to me, later.  For those who may not know, UNC Chapel Hill and Duke University – about twelve miles apart – are fierce rivals.

So of course, fate worked against her.  It was cold the next morning, much colder than we’d expected on a late April morning in the south.  “I might have to wait for you in the car while you walk around,” said coatless Patricia as we pulled into the Duke visitor center car park, behind their ecumenical chapel (which looks like a cathedral).  I know what you’re thinking, and mine wouldn’t have fit her.  She’s a lot taller.

“We can go to the gift shop and get you a sweatshirt or hoodie or something,” I said.

“Maybe they have something that doesn’t say Duke.”

We went into the Duke gift shop and searched and searched.  The question was not whether the clothing had “Duke” emblazoned on it – they all did – but whether the letters were large, huge or humungous.

“Can I help you?” a pleasant young woman finally asked us.

Patricia told her, “I didn’t bring a coat and I need something warm.   But I can’t keep anything that says Duke because my god-daughter goes to UNC.  I’ll never wear it again, so I don’t want to spend much money on it.”

The young woman seemed unfazed by this blunt confession.  “I might have something for you here.”  She led us to the sweatshirts and came up with one in bright Duke blue, with DUKE in large letters on the front.  “Eighteen dollars.”

“Don’t take any pictures of me with it on.  And definitely don’t post it anywhere.  I don’t want Lisa or her mother to see me in a Duke sweatshirt.”

The school, started in 1838, was called Trinity College until 1924 when it received a huge endowment from tobacco billionaire James B. Duke and was renamed Duke University.  Today, it’s a mega university with several campuses on over 8000 acres.

The gift shop led out to “the Plaza” and after a few left turns, we ended up at the front of the chapel.  Built of North Carolina stone.  Finished in 1932.

After the chapel, we went to look at the main library, next door, with it’s gothic reading room.  Very Oxbridge.  Or Hogwarts.

Our reason for being at Duke — the only thing that could have gotten Patricia (an avid gardener) to visit “the enemy” — was the Sarah P. Duke Gardens.  It was a short wander down Chapel Drive from the chapel.

Sarah P. was the wife of Benjamin N., brother of James B.  In the 1930s, a Duke faculty member convinced Sarah’s daughter to fund a garden in memory of her mother.  The gardens occupy 55 acres, with five miles of paths.  It seemed to be a community place: lots of dog walkers and joggers mingled with the tourists.

An unusual feature of the garden — at least one I’d never heard of — is an area within its grounds where people can scatter or bury cremated remains.  In order to (officially) have ashes placed there, you have to make a contribution of $25,000, which also gets you the name of the deceased (who must have a Duke connection) inscribed on one of the stones that line the gardens.   Ashes in public gardens can’t be as unusual a practice as I thought, though, because UNC also allows ashes in its gardens.  They only charge $350, however.  Something to consider if you need to decide which one to attend. 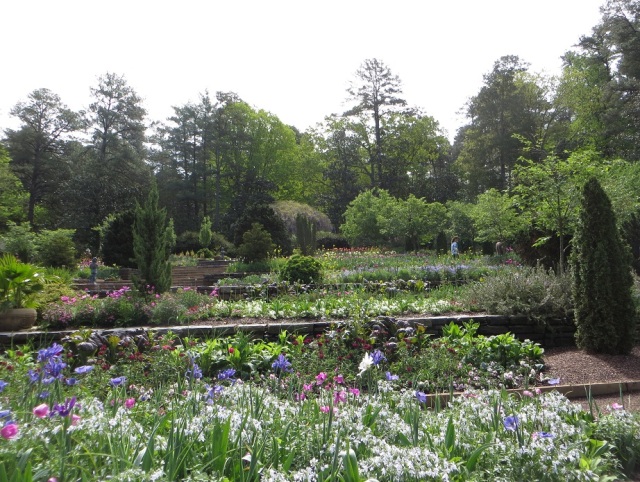 I remember a newspaper article, published several years ago, about the problem that popular historic estates had with people surreptitiously leaving ashes behind on their grounds.  Uncle Joe always wanted to be buried at Mt. Vernon.  So to Mt. Vernon and Monticello: Duke University has a fund-raising idea for you.

From the University, we went to the Duke Homestead State Historic Site and Tobacco Museum, about five miles away.  It’s where it all started for the Duke family.

Washington Duke, the 8th of 10 children of a farmer, left home at aged about 21 to become a tenant farmer himself.  He married well, acquired land from his father-in-law, then started amassing land for himself.  He completed this house in time for his marriage to his second wife (his first died after 5 years of marriage) in 1852. 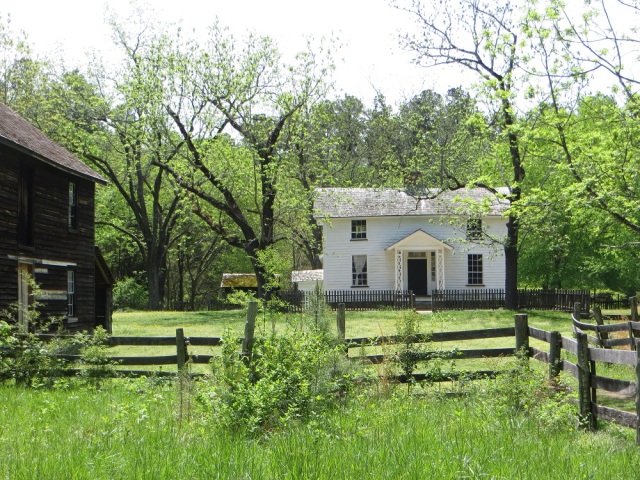 He started as a cotton farmer but when his cotton crop died, he turned, in 1859, to tobacco.  After the Civil War – during which he served in the Confederate army – he returned to the homestead and began turning their tobacco crop into smoking tobacco.  By 1873 the Dukes were producing 125,000 pounds of smoking tobacco a year and Washington was looking to expand.  The Dukes built a proper factory in downtown Durham, near the railroad, and by 1890, the Dukes controlled the largest tobacco company in the world.

The homestead, administered by the State of North Carolina, included the Duke house, his first three “factories” (which were really no more than large barns — you can see part of the third factory in the picture with the house) and a museum on the history of tobacco.  Above is Flo, a catcher in a cigarette factory.  Her job is to inspect and catch cut cigarettes as they rolled off the machine, and put them into a box.  She is not happy with her job and is wondering why she has to wear the silly hat.  Check out the shoes, though.  A little fancy for a production line uniform, what.

8 Responses to The Dukes of Durham