Posted on May 7, 2013 by thehistorytourist

From the city of Raleigh’s website: “Raleigh’s history is bountiful. In 1792, Raleigh was created to be North Carolina’s seat of government. To fully appreciate this uniquely blessed city, one must contemplate the history and delightfully complex composition of the state that created Raleigh.”

That description makes me smile.

North Carolina’s capitol was New Bern, on the coast, when the British occupied it during the Revolutionary War and North Carolinians decided that a capitol a little more inland might be a safer bet. Their legislators agreed to build a city specifically to serve as the State capitol.  The site they chose was mid-State and, more important, not far from their favorite watering hole: Isaac Hunter’s Tavern. Legislators in the 18th century, like those today, knew how to prioritize. 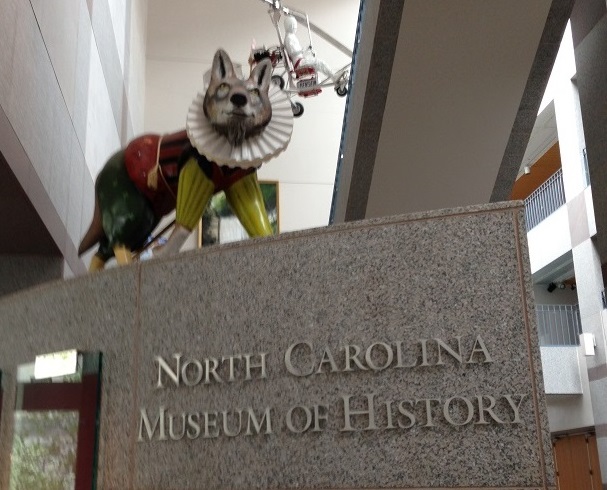 I had always wanted to see the Research Triangle area (Raleigh/Chapel Hill/Durham) so when Patricia told me that she wanted to go to Chapel Hill to visit her god-daughter at the University of North Carolina, I insinuated myself into the visit by offering to drive.

Our first stop was Raleigh. The good news is that downtown Raleigh has a lot of free stuff for tourists: the North Carolina Museum of Natural Sciences, the North Carolina Museum of History, the Capitol, and the Governor’s Mansion, just to name a few within a block or two of each other. The other good news (at least for museum supporters) is that – due at least in part to the fact that they’re free – they have a lot of visitors.

The bad news is that – due at least in part to the fact that they’re free – they have a lot of visitors. We started at the Natural Science Museum. Along with every school child in North Carolina.

I was there to see the Titanic: the Artifact Tour, a traveling exhibit that has since moved on (there are several iterations of the exhibit showing at the same time around the country, so please see their schedule for dates and locations). There was a fee for the special exhibit, so it was much less crowded than the rest of the museum.

As we entered the Titanic exhibit, they gave us a  “boarding pass” with the name of a Titanic passenger. Mine was  first class passenger Emma Eliza Ward, the 60-year-old widow of William R. Bucknell, founder of Bucknell University.  Emma was returning from France to the US with her maid, for her son’s medical school graduation.  According to the museum “boarding pass,” Mrs. Bucknell told her friend Margaret “the Unsinkable Molly” Brown, before they boarded, that she had “evil forebodings” about the ship.

At the end, we could see if she survived the trip. The Holocaust Museum in DC does something similar – we were given a card with a name as we entered, and we would find out at the end if that person survived.

There was a lot of information stuffed into a not-very-large exhibit. There were stories about the crew and passengers, general information about the ship, artifacts recovered from the wreck, ship models, full-sized mock-up of cabins and information about the salvage process. No photographs allowed. My favorite part: a large slab of ice that was part of a “touch the iceberg” interactive exhibit. Yes, I am 10.

Mrs. Bucknell and her maid survived the trip, as 97% of the women in first class had. 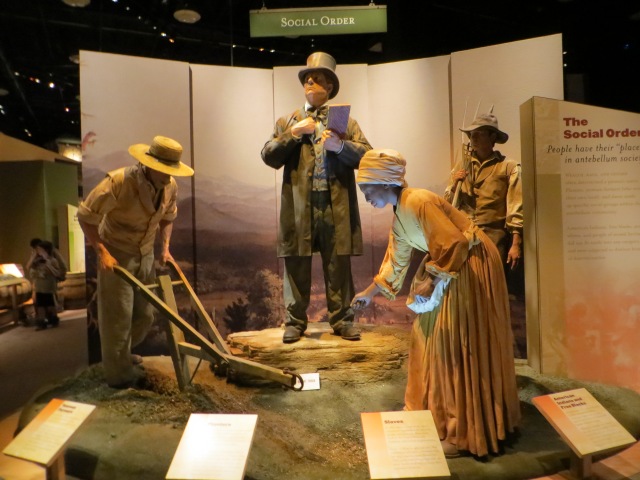 Across a courtyard was the North Carolina Museum of History. That was not as popular with the school crowd as the Natural Science Museum, which was a shame because the exhibits were very much targeted to children. You could milk a cow or pose as a Civil War soldier. Maybe the schoolchildren are scheduled for another day?

There is a chronological exhibit of North Carolina history on the first floor and exhibits on Carbine William, North Carolina sports and Latino life in North Carolina on the third.  The photo above is of a swim suit made ca. 1950 from Nazi armbands.  The husband of Fleta Calicutt of Raleigh, who made the suit, was an infantryman who brought home a bolt of uncut bands as a souvenir.

Also on the third floor: a special exhibit on pottery.  The man at the entrance of the pottery exhibit looked hopeful as we approached.  Then we saw the sign: entry required a fee and a separate ticket. I like pottery and would have paid to see the exhibit. Except. The exhibit was on the third floor and the ticket sales were on the first. We’d driven five hours from DC and made our way through two museums and we just couldn’t find it in ourselves to go down to the first floor to buy the tickets, then come back up to the third to see the exhibit. So we gave it a pass. The man looked sad as we turned away. Hint to museum staff: make the special exhibits signs more prominent. Or – radical thought – get the people at the reception desk to mention the exhibit as they give their introductory spiel. 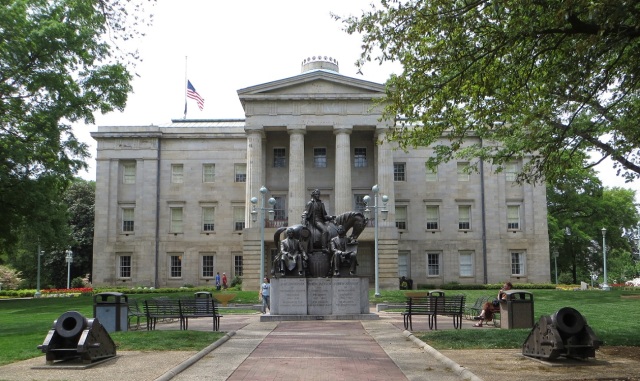 When we were done with the museums, we wandered across the street to the North Carolina State Capitol building.  We sat on a bench in front of it and ate a late lunch while deciding whether to take the Capitol tour. The statue is of the three US Presidents who had been born in North Carolina: James Polk, Andrew Jackson (although Jackson himself claimed to have been born in South Carolina and the White House website sidesteps the controversy by saying that he was born in “the Carolinas”), and Andrew Johnson.

It was very late afternoon by then and both of us had hit a wall, so we skipped the Capitol and headed for our hotel.  We stayed at the Homewood Suites on the Chapel Hill/Durham line. It was an easy 20 minute drive from Raleigh and the hotel itself was great. The suite came with a living room/kitchen combo, and a separate bedroom. Breakfast each day, dinner Monday through Thursday, parking, and a shuttle to take you wherever you want to go within 5 miles of the hotel were included in the cost of the room.