Of Ships and Spurs and Sealing Wax

Posted on January 21, 2013 by thehistorytourist

“Toward the back are the bone models,” said the elderly volunteer at the U.S. Naval Academy museum’s reception desk.  He was pointing out the highlights of the museum’s model ship collection to me, on a map.

I hadn’t quite understood him.  “What kind of models?”

“Bone models,” he repeated.  “Made out of bones.  Sometimes human.” 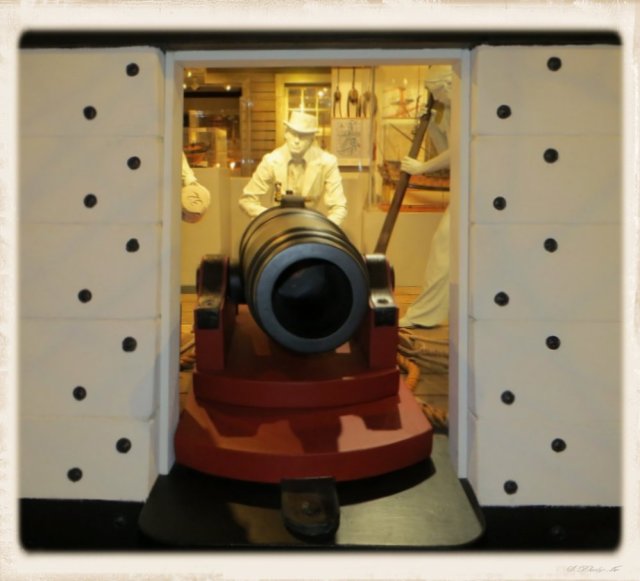 I had an hour before my tour started at the U.S. Naval Academy, so I decided to spend that time at the Naval Academy museum.  I got directions from the Academy visitor center. 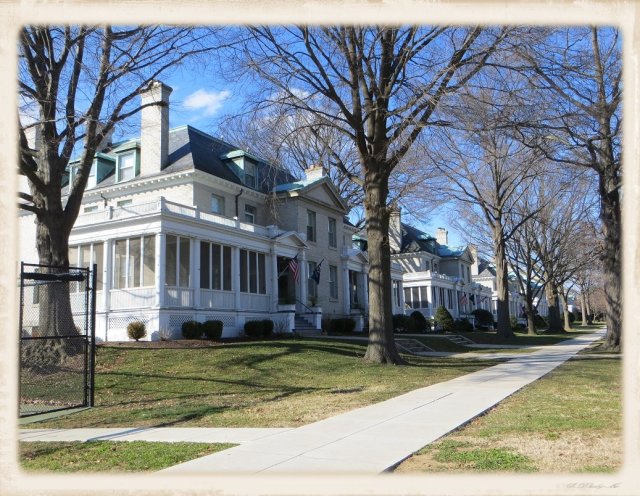 The museum was a five minute walk from the visitor center, past the homes of senior academy administration and the Academy commandant. 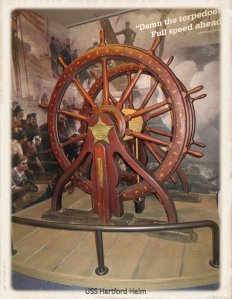 The museum receptionist gave me a map and told me that on the first deck – Navy-speak for the first floor — were objects related to naval history, arranged chronologically.  The second deck held the ship models.

The picture on the right is of the helm of the USS Hartford.  It was launched from the Boston Naval Yard in 1858 and served throughout the Civil War.  Decommissioned in 1926, it eventually ended up in Norfolk, Virginia, where it was allowed to deteriorate to the point that it sank at her berth.  They salvaged parts of it, including the helm.

But there was a lot more to the first deck exhibits than just Naval history.  Some samples: 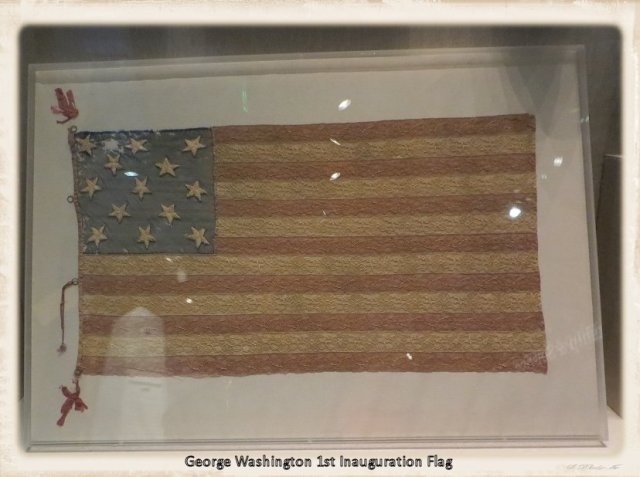 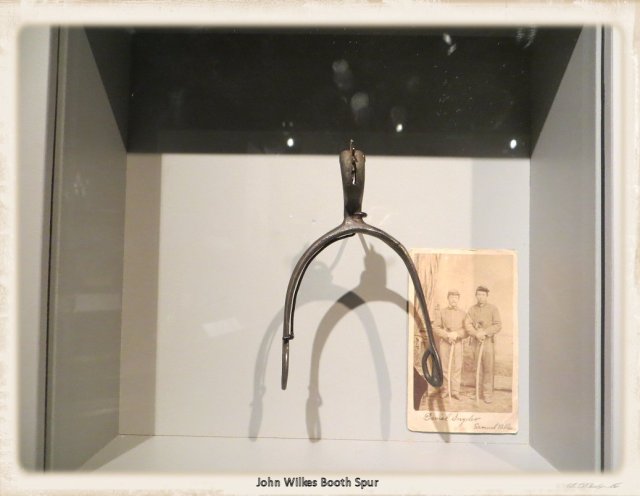 As John Wilkes Booth jumped from the presidential box at Ford’s Theater, after shooting President Lincoln, his spur caught some bunting draped along the box.  This spur was picked up by an audience member, Samuel Reem, from the stage and is believed to have belonged to Booth. 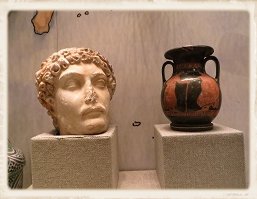 I can’t find my notes on the items to the left, but I’m including them to show the breadth of the museum’s collection.  Individuals associated with the Navy seem inclined to donate objects to the Academy and the Academy seems inclined to display whatever interesting object is donated to them, even if the object has nothing to do with the U.S. Navy.  The Booth spur, for example, was donated by a Naval officer descendant of Reem’s.

There was a collection of ship models from the 17th , 18th and 19th centuries on the second deck.  To get there, the receptionist said, I could take a ladder (aka stairs) near the space exhibit or the elevator across from him.  No Naval term for elevator, I guess.

I must admit that I wasn’t that enthusiastic about seeing ship models.  In my mind, I was seeing those plastic airplanes that children glue together. 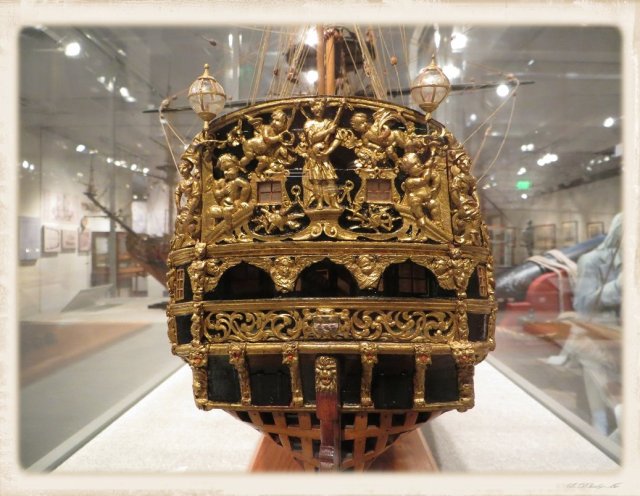 Definitely not glued plastic models.  That’s the HMS St. George, built in 1701, above.

Henry Huddleston Rodgers Jr. was a WWI army officer and wealthy heir of a Standard Oil and Virginia Railway executive.  He collected scale models of British ships (built by early ship designers to use as marketing or financing props) and when he died in 1935, they were donated to the Academy.  They now make up the Henry Huddleston Rodgers Ship Model Collection: 108 ships and boats dating from 1650 to 1850 and displayed in 17th century cases. 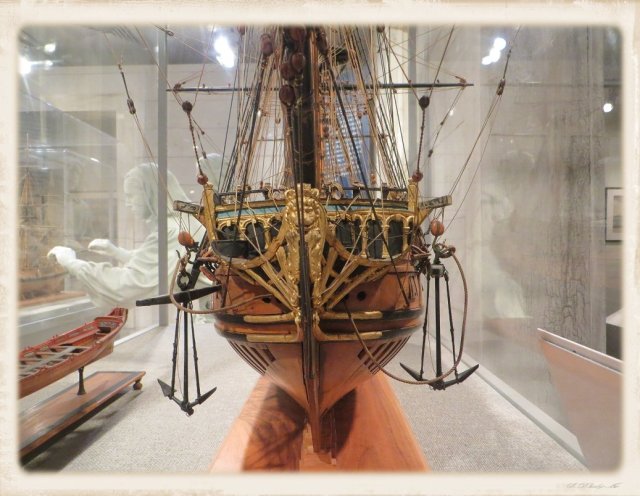 The photos above and below are of oldest model in the collection and one of the oldest in the world.  It’s an English Third Rate 56-Gun  ship circa 1650; scale 1/4 inch= 1 foot.  Fifteen full-sized versions of this ship were built and saw action between 1652 and 1674, during three wars between the English and the Dutch. 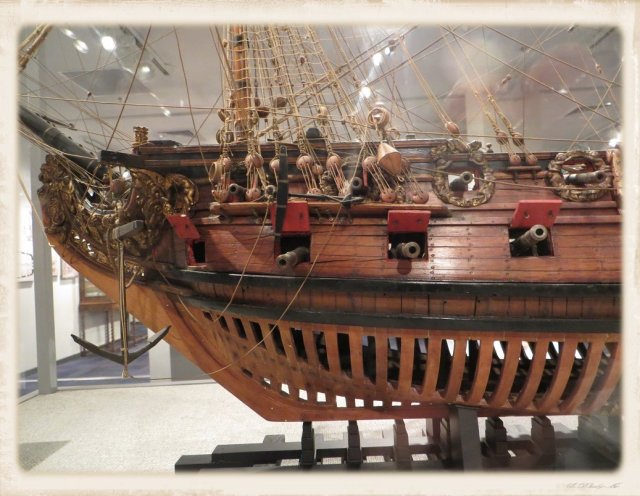 Also on display is one of the world’s largest bone model collections.  During the Napoleonic Wars, French prisoners-of-war in Britain passed the time by building ship models out of bones – mostly beef bones from food that they were given, but sometimes other bones (including human) that they scavenged from various places. 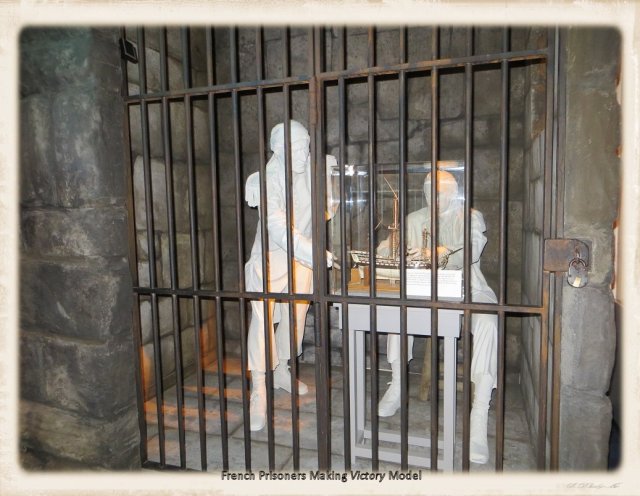 The model ships were extremely popular and marketable even in their day, and locals often donated fabric, threads, shells and other objects to the prisoners to use on the models. 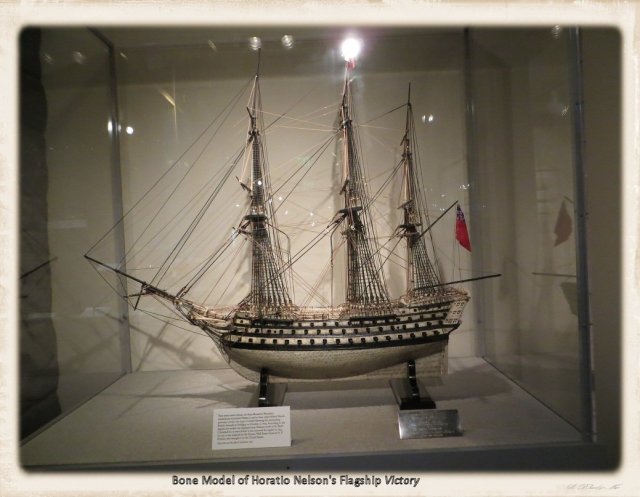 It took 15 POWs two years to build this bone model of Horatio Nelson’s flagship, the HMS Victory.   The rope is made out of hair.  The story goes that it was once displayed on top of Nelson’s tomb at St. Paul’s Cathedral.

I had less than an hour to run through the entire museum, which was no where near time enough.  The museum isn’t very big but it is packed full of interesting and often quirky objects.  And I could have spend a lot more time gazing at the ship models.

Admission to the Naval Academy museum is free.  It’s open every day except Thanksgiving, Christmas and New Years.

Tip: the formal restaurant in the Naval Academy Club, called The Alley, is open to the public for lunch (members only at dinner).  It’s across the street from the museum and our Academy tour guide said that the interior of the Club building is worth seeing.

11 Responses to Of Ships and Spurs and Sealing Wax