The Art of Remembrance

Posted on October 5, 2012 by thehistorytourist

Civil War battlefield monuments typically are placed at the site where a regiment made its stand, so it can be quite the adventure to hunt down them down on an expansive battlefield.

At Antietam, however, they generally come in clusters, or in rows neatly lining a road and easy to access.  And there are lots of them – 104.   Pennsylvania alone has 20 monuments.  If you see a soldier standing on a pedestal, it honors a Pennsylvania regiment. 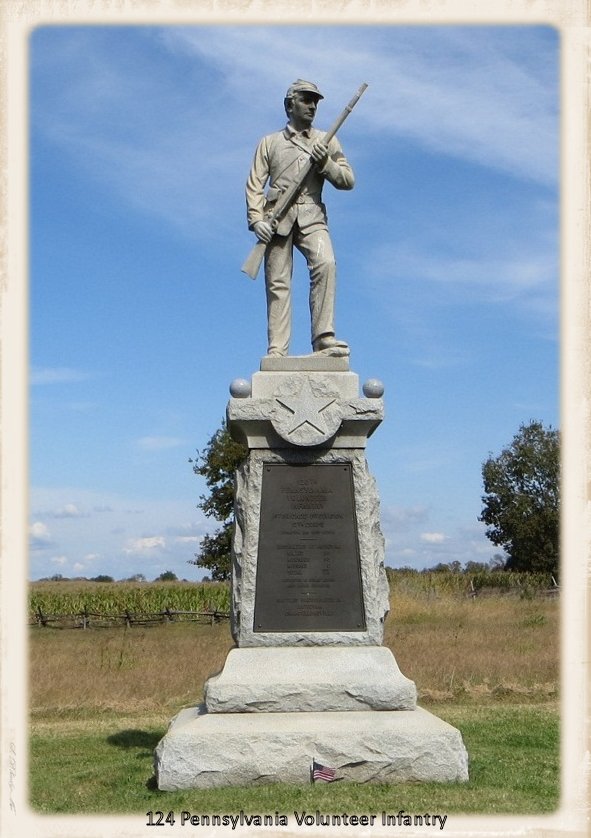 Antietam has numerous walking paths and by linking them together, you can cover most of the battlefield.  The website has trail guides.  We have an extremely elderly dog who is only good for a mile or two of walking, so we did the car tour route.  If you don’t want to use the web version, you can take an audio tour, either by downloading a podcast or buying a CD in the gift shop.

A sample of the more unusual monuments: 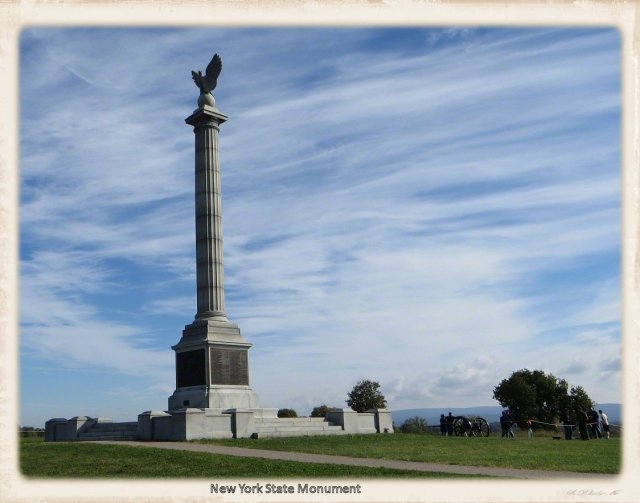 Almost one-fourth of the Union force – 27,000 men – came from New York. They were largest contingent from any state.  Three thousand seven hundred sixty five of them were killed or wounded.  Dedicated in 1920, the New York State monument is a 58 foot column with an eagle on top.  The National Park Service website says that it’s the tallest monument on the field.

The 15th Massachusetts Volunteer Infantry had the highest casualty rate of any Union regiment.  Of the 606 men in the regiment, 75 were killed and 255 wounded.  Another 43 later died of their wounds.   Dedicated in 1900, their granite monument is of a wounded lion and it stands where they were positioned the morning of the battle, where most of their casualties happened.  The monument is inscribed with the names those who were killed, and in the foundation is a roster of the entire regiment.

The Irish Brigade, formed in 1861, was a predominant Irish-American volunteer infantry brigade.  It was made up of New York, Massachusetts and Pennsylvania volunteers and fought for the Union throughout the Civil War.  There apparently were interesting political issues involved in the formation of an Irish Brigade by a federal government that was, in theory, against ethnic brigades.  I couldn’t find a reliable online source for what those issues could have been, however, so I’ll leave it at that.  The monument, dedicated in 1997, features of bronze relief of the brigade in action on one side, and a bronze portrait of Irish Brigade commander, Brigadier General Thomas Francis Meagher, on the other.  Meagher has a fascinating back story.  He was born in Waterford, Ireland, and was an Irish nationalist.  Sent to a penal colony in Australia by the British at age 25, he escaped to the US in 1853.

The 90th Pennsylvania Volunteer Infant Regiment fought in the Cornfield, where their monument is located.  Their original memorial was created by the veterans of the regiment sometime in the 1880s, using three actual Civil War rifles and a camp bucket.  It was dismantled around 1930, because it was deteriorating and they were afraid that it might be stolen, and now is stored in the NPS collection.  The new monument, a copy of the old, was funded by the descendants of the 90th Pennsylvania Volunteers and dedicated in 2004.  What it says on the bucket:

The federal government placed a moratorium on new monuments at Antietam in 1991 (the Irish Brigade monument was grandfathered in), causing a new conflict.  There are only four Confederate monuments at Antietam, compared to the 100 Union (funds for the monuments were generally raised privately by veterans and the South was too poor, in the years following the war, to donate much to monuments), and no monuments for 17 states with brigades in the battle.  Confederate groups and at least some of the 17 states want to fix that.

Those states have gotten their members of Congress to introduce legislation to circumvent or end the moratorium.  There also are preservation groups against lifting the ban.

Meanwhile, groups backing new memorials have gotten around the moratorium by putting up their monuments on privately owned parts of the battlefield.  A statue of Robert E. Lee went up in 2003 on land owned by Maryland millionaire and Confederate wannabe William Chaney (who outbid the NPS for some of the battlefield) and most recently, a memorial to the 11th Mississippi Infantry was dedicated this past August on private land adjacent to the cornfield where they fought.

2 Responses to The Art of Remembrance