Posted on July 1, 2012 by thehistorytourist

In the early 1990s, Disney announced plans for a new theme park based on American history, to be built in the Virginia suburbs of DC.  The (very rich and powerful) locals fought against it – for many reasons including the feeling that Disney would whitewash history  — and Disney abandoned the plan.

Just down the street from the actual historic Jamestown site is Jamestown Settlement, a recreation of Jamestown and its environs, developed by the State of Virginia in 1957 as part of the 350th celebration of Jametown’s founding.  It’s a Jamestown theme park without the rides.

It has a fort, a Powhatan village, and the Susan Constant, the Godspeed and the Discovery, the three ships that brought the Jamestown colonists to America.  There’s a film and exhibits.  There are interpreters in wool and buckskin ready to show visitors how to fire a musket, harvest corn and navigate by the stars.

Scholars have been arguing for years: are living museums and historical recreations good for history?  Ada Louise Huxtable, an architectural critic and recipient of the MacArthur genius grant, wrote in her book for the New York Times that reproducing communities “devalue authenticity and denigrate the genuine heritage of less picturesque periods….” 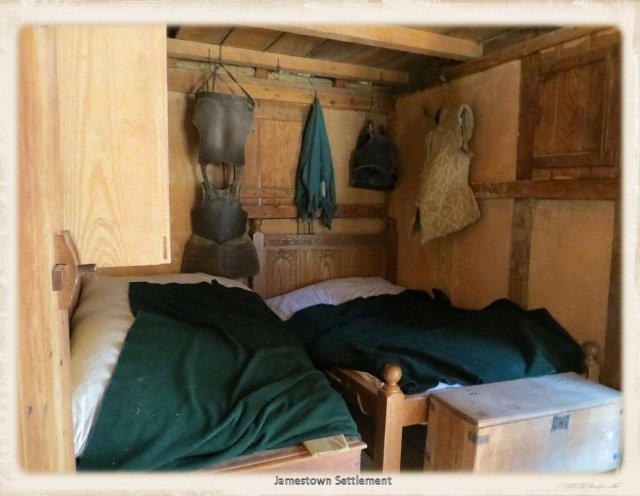 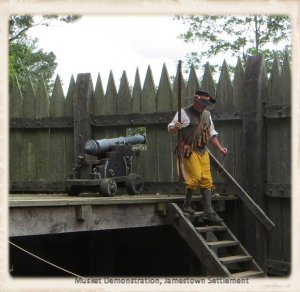 I’m not a scholar – and heaven forbid I disagree with a MacArthur genius – but I’m not completely onboard with Huxtable and others who are appalled…appalled, I tell you…that the masses like the costumed interpreters and the pretty buildings.  I realize that museums must deal with the fiscal realities of historic realism versus attracting visitors and I don’t think that such presentations cater to the lowest common denominator.  I like costumes and pretty and while I may be low and common, I am not a denominator.

I do, however, think that there’s a difference between a museum (for education) and a theme park (for entertainment) and I have certain expectations of a place that calls itself a museum (as Jamestown Settlement does).  And things like original buildings and artifacts are important to me.    The settlement at Jamestown Settlement – the buildings, the furnishing, the ships – is a reproduction.  What historic artifacts there are, are in an exhibit at the visitors’ center.  On that basis, Jamestown Settlement just didn’t work for me. 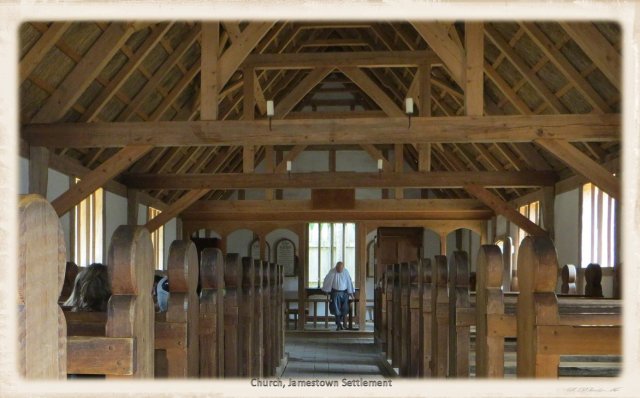 I’m writing about the merits of history themed (but not historic) sites because I really don’t have much to say about Jamestown Settlement itself.  Our visit was pleasant.  But.  It didn’t feel authentic — it felt like Disneyland without the polish.  The buildings in James Fort are wrongly placed.  Its interpreters needed better training.  I wouldn’t recommend it to history geeks unless you have children under 10.

It was full of school groups, which the actual historic site was not.  I hope that the visit to Jamestown Settlement will trigger an interest in history that will translate into visits to the actual site someday.

My most vivid memory from a previous visit, years ago:  A young woman with long dark hair, wearing a buckskin dress, hurries down a path, followed by a gaggle of children.  “Are you Pocahantas?  Are you Pocahantas?” they ask, over and over and over.  Finally, she stops and snaps, “You’ve already asked me that a dozen times!  I am not Pocahantas.”

Maybe not so Disney after all.

2 Responses to Are you Pocahantas?