Posted on May 9, 2012 by thehistorytourist

There are 250 rooms – including 34 bedrooms, 43 bathrooms, and 3 kitchens — in George Washington Vanderbilt II’s Asheville summer house, the Biltmore.  So I couldn’t help wonder, as the head and only parlor/under/chamber/laundry/kitchen maid at my house: who cleaned… and still cleans, for that matter…these rooms?

I’m not the only one wondering.  The Biltmore has picked up on the interest in the lives of those in service and offers a specialty tour called, “the Biltmore House Butler’s Tour.”  On the Butler’s tour, known as the “Behind the Scenes Tour” until the advent of Downton Abbey, visitors can (according to their website) “… learn about the work of the domestic servants.”  The tour goes upstairs to the fourth floor, where the servants lived, and to the basement, where the servants mustered.

The Biltmore doesn’t allow visitors to take photos inside, so you’ll have to look at my outside pictures while I tell you about the servants.  But first the basics:  The Biltmore was designed by Richard Morris Hunt, after the French Renaissance chateaux of the Loire Valley, and finished in 1895.  Frederick Law Olmstead designed its grounds, now covering 8000 acres.  It’s still owned by Vanderbilt descendants, making it the largest privately-owned house in the U.S.

I don’t know why it was named the Butler’s Tour, since the head of staff in George and Edith Vanderbilt’s day was the housekeeper, Emily King.  She made twice as much ($300 a month) as the nameless chief butler.  Servants who worked for her, in oral histories taken later in their lives, said that they called her “the Matron.”  The Butler’s Tour takes visitors into Mrs. King’s recently restored suite, above the servant’s entrance.  No suite for the butler.

There are 21 bedrooms for maids on the fourth floor and 3 have been restored for viewing.  A perk for Biltmore maids: they all got private rooms.  The maids’ hall also had indoor bathrooms, another rare benefit for that time and place.  Male servants lived off-site, because the Vanderbilts did not want fraternizing amongst staff.  In keeping with the custom of the time, they required domestic staff to be single.  Exceptions to the “unmarried” rule were made for the butler and the chef.  Biltmore’s use of the term “chef,” instead of “cook” seems to imply that his standing in the house was above that of the average servant, and so the exemption.   Wish I’d asked why the butler was exempt, though.

There was a staff of about 40 working in the house at the turn of the 20th century, and  the Vanderbilts were ahead of their time in hiring an integrated staff.  Another thing that it didn’t occur to me to ask and I couldn’t find in other sources was whether housing was integrated.   Today, a staff of 12 not only keeps the house clean, but also works on other buildings on the Biltmore Estate. 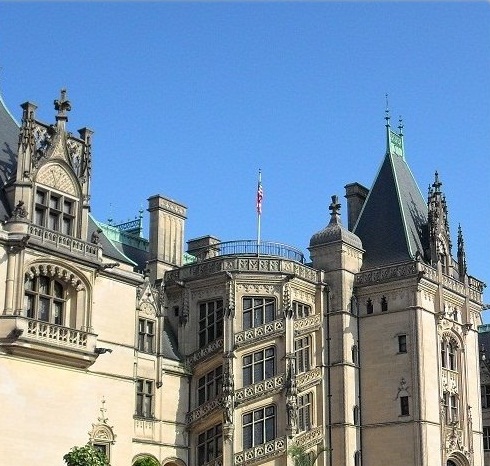 The stables, next to the house, have been turned over to shops and dining.  We had the opportunity to admire the stable’s brickwork while having lunch at the Stable Restaurant.  The food was very good too.  On another part of the estate, Antler Village (included in the general admission), there are minor exhibits about the traveling Vanderbilts, and about historic cars and crafts.  Their winery, originally a dairy barn designed by Biltmore house architect Hunt, has guided tours.

The Butler’s Tour is $17 added to the general admission cost.  Details on the Biltmore website.

Update: A very kind reader supplied these links to more information about Mrs. King and her husband.